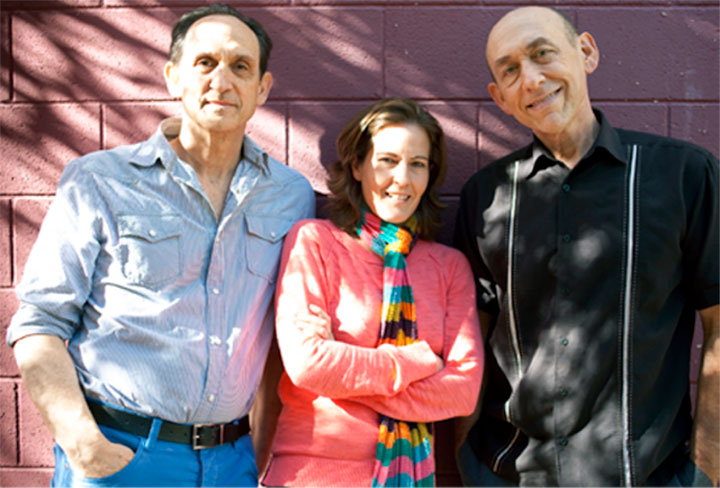 PHOTO: JANET VAN HAM Devon Terrill, seen here with filmmakers Joe and Harry Gantz, has forged a successful career in Hollywood film-making. But the project that’s perhaps closest to her heart is the award- winning independent documentary GORK! that she produced and directed about the life of her younger brother, Adam, who has a number of developmental disabilities, including autism.

When Devon Terrill co-produced a documentary film about poverty, she saw firsthand how the nation’s worst recession in 80 years has destroyed the American Dream for many hard-working people.

"It only takes one bump in the road to put families in financial crisis nowadays," says Terrill, 96BA. "I could relate to the stress of insecurity that the families in the film were feeling, but I also knew my family had enough food to eat and a roof over our heads—and a family in Iowa that will be there for us if we need them. Millions of Americans are not so lucky."

American Winter, which debuted on HBO this past March, follows eight families in Portland, Ore., that used the city’s 211 crisis hotline during the winter months of 2011-12. Diedre, a college graduate who took a minimum-wage job after being laid off, also has to sell plasma and salvage scrap metal in order to fill the fridge for her family of five. Shanon is a single mother struggling to pay medical expenses her insurance won’t cover after her daughter is diagnosed with a stomach condition requiring hospitalization.

Ben, who lost his home to foreclosure after his job was cut, explains how he and his wife used to talk about their dreams and what they would do with their lives: "Forget the dreams," he says in the film. "How do we make it to tomorrow? Tomorrow’s the dream. This dinner is the dream."

The 90-minute film (www.americanwinterfilm.com) aimed to put a human face on the recession, show the impact of cuts to safety-net programs during a time of unprecedented need, and break down stereotypes.

"The biggest misconception is that people in poverty are takers or deadbeats, that they’re taking advantage of the system," Terrill says. "But the truth is that most of them have worked since they were teenagers, and they don’t want to be in poverty. When you’re struggling every single day—even with a full-time job—to put food on the table, it is hard to get beyond that."

Terrill got her start in filmmaking when she was a senior at Iowa and successfully applied—on a whim—for an internship at the Academy of Television Arts and Sciences in Los Angeles. Her Iowa background and education have proved helpful in her career ever since.

"Iowans have a reputation in L.A. for being pragmatic, focused, and committed," she says. "Even though I didn’t go to film school, I was able to think critically and creatively at the same time, and see things through to completion, and that impressed people."

Terrill’s resume now includes numerous TV series, documentaries, and feature films for Showtime, Fox Searchlight Pictures, Animal Planet, the Sundance Channel, the Travel Channel, and more. For the past eight years, she’s worked as a producer with the Emmy-winning sibling duo, Joe and Harry Gantz (best known as the creators of HBO’s Taxicab Confessions), and their production company, View Film.

Even though American Winter has been released, Terrill’s work on the project isn’t over; she could be working on outreach for another year as part of the film’s social action campaign. As she explains, "Filmmaking is an all-consuming experience that usually stretches over years, and at the end of it, there is a tiny piece of that experience that is the actual film."