View All From You
Share
IOWA Alumni Magazine | October 2009
Where the Wild Things Are
By Shelbi Thomas
An unusual and little-known University of Iowa center offers a safe haven for birds that fall prey to civilization. 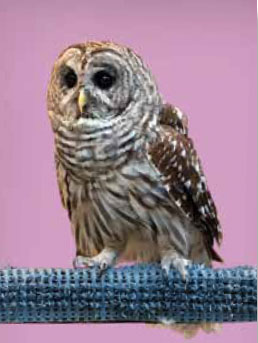 Jodeane Cancilla races down the highway to meet a man—a complete stranger—at a rest area near Wilton in southeast Iowa. He hands her a cardboard box that she opens carefully. Inside, a red-tailed hawk lies motionless, its reddish-brown feathers stained with blood. The bird, found in the countryside near Muscatine, is critically injured after tangling with a barbed wire fence. Cancilla doesn't know whether it will live or die.


As director of the Macbride Raptor Project, Cancilla has been the first responder to many sick or injured birds of prey in eastern Iowa. Each year, she and her team care for nearly 200 raptors—predatory birds that may have collided with a vehicle or a power line, or been poisoned by pesticides, illegally hunted, or unlawfully domesticated by humans. About half of the birds recover fully and are released back into the wild. A few are left permanently disabled and find homes in zoos and nature centers. Others cannot be saved.

Such stories of life and death play out every day at the Macbride Raptor Project, a joint partnership between Kirkwood Community College and the University of Iowa's Division of Recreational Services. Founded in 1985, the project aims to rehabilitate raptors, conduct field research on Iowa's native birds of prey, and hold public educational programs to foster an appreciation for the great outdoors. "A raptor has an intensely wild and free spirit," reads the project's brochure. "To come to the aid of one of these birds is to give expression to a similar spirit within ourselves."


Former UI student Burke Thayer started the program after working at a similar center at Ohio's Antioch College. He knew that raptors play a crucial role in the ecosystem—keeping the populations of their prey in check and saving farmers hundreds of dollars each year in rodent crop damage. As roads and housing developments have replaced Iowa's prairies, though, more than half of the state's native raptor species have left or been designated endangered.

The wounded red-tailed hawk found in Muscatine was certainly in grave danger. Cancilla rushed the bird to Kirkwood's Animal Health Technologies program in Cedar Rapids, where veterinarians gave it blood tests, x-rays, and a thorough physical. With cuts and bruises all over its body and a lacerated wing, the bird underwent surgery and then transferred to a small intensive care cage, where it was left alone to heal and stabilize. Only time would reveal whether the hawk would make it to the project's rehabilitation center.

Nestled in the woods of the Macbride Nature Recreation Area, the center overlooks the Iowa River and Coralville Lake. The serene setting 15 miles north of Iowa City attracts many wild hawks, ospreys, eagles, and turkey vultures, which glide overhead as families walk through the public raptor exhibit. The site also includes a bird blind, a flight cage for recovering birds, and gardens that draw butterflies and hummingbirds.

Most importantly, the center provides sanctuary for more than 30 permanent residents, including Tremelo, an eastern screech owl; Reina, a bald eagle; and Highway, an American kestrel. Cancilla doesn't give names to birds of prey that may one day be released from the center, and volunteers only enter these birds' territory to feed them and clean their cages. The less contact a raptor has with people, the better its chance of recovery and survival in the wild. Even with the named raptors, Cancilla says, "We make sure they're well-fed and cared for, but these are not our pets." 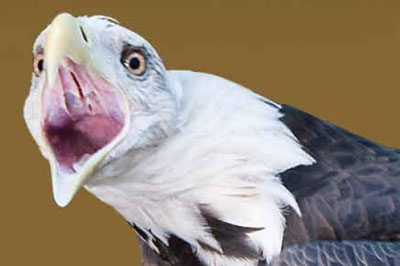 Staff and volunteers admit it's hard not to become attached, though. Ever since Cancilla identified a barred owl from a field guide as a child, she's been hooked on birds. After volunteering for the project while a Kirkwood student, she accepted a part-time position upon graduation. Now, she's one of two staff members for the project, which runs primarily on donations and the devotion of around 55 trained volunteers.

For 22 years, Cancilla has led project staff and volunteers through triumph and heartache—from the exhilaration of watching birds they've nursed back to health take their first flight, to the sorrow over those with wounds too great to heal. Of the recent death of a 24-year-old broad-winged eagle, Cancilla says, "It was like losing an old friend."

Kathleen Kuenstling, an Amana restaurant owner who volunteers at the center, regularly carries buckets of grub to the raptors. Aquila the golden eagle prefers to dine on quail; the owls eat one to three mice each; and the bald eagles and Aura the turkey vulture feast on pig. Bird by bird, Kuenstling records how much food each eats—a requirement of the various wildlife organizations that accredit the project. After years with the center, she knows each raptor's reaction to feeding time: Kanati the peregrine falcon will dart around as though on a caffeine-high, while Aquila eyes her with calm curiosity.

Kuenstling admits to crying this past August when she discovered a crow dead in its pen. Only at the center for three days, the injured bird was likely weakened by an overnight storm.

The red-tailed hawk from Muscatine seemed destined for a better fate. After a few weeks in solitude in Cedar Rapids, the bird transferred to the Macbride rehabilitation center. There, it settled into the flight cage, where raptors expected to be re-released into the wild take flying lessons. Inside the 100-foot-long cage, birds can acclimate to the changing weather conditions and practice spreading their wings. An additional area completed this fall accommodates eagles with their seven-and- a-half-feet wing span (at this time of year, the center typically sees an influx of eagles poisoned after feeding on deer shot with lead bullets). 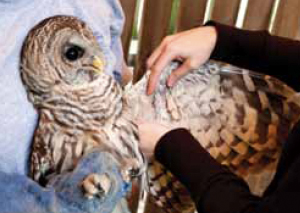 Each day, Cancilla spent up to an hour with the red-tailed hawk in what she describes as "physical therapy for birds." Using thick protective gloves to guard against the bird's scythe-sharp talons, she placed a jess—a leather strap—on the hawk's leg. The jess hooked to a fishing line that Cancilla used as a loose leash. With her help and encouragement, the hawk could practice flying, landing, stretching its wings, and diving down to eat. After two months of therapy, Cancilla believed it was strong enough to fly home.

Of course, some birds will never migrate from the center. Take Wannago the great-horned owl, which was raised by a family in Washington, Iowa, and then released into the wild when old enough to fly. Ten days later, Wannago appeared hooting outside her former home, missing her left eye and desperate for food and shelter. "Wannago believes she's a person," says Cancilla, who now cares for the owl at Macbride. "Once that happens psychologically, you can't change it back."

Aura was also domesticated by people, who clipped the turkey vulture's feathers to make him a pet and then eventually left him for dead in a snow bank. Saved by the Macbride Raptor Project, the comical bird now preens and fans his feathers for guests. Aura also plays pranks on new and unsuspecting volunteers, untying their shoelaces and trying to grab food straight from their buckets.

About 10,000 people visit the raptor center each year, usually as part of a school or community group. Area schoolchildren often experience their first encounter with nature here, mesmerized by their closeness to cardinals, chipmunks, and raptors. Cancilla says, "They may normally be a rowdy class, but the teacher asks me afterwards, 'Can we come back? That's the quietest they've been all year.'"

Cancilla enjoys watching the children's faces light up as they see Spirit the bald eagle for the first time. After crashing into a power line and having the tip of her wing amputated, Spirit is no longer able to fly. Instead, she hops around her pen—making an oddly unexpected kind of chuckling noise at every visitor who comes near. "It's hard to describe the support and encouragement you get from students," says Cancilla. "When I'm walking around Iowa City, they say, 'You're the one who takes care of the birds. Here's some of my allowance for Spirit,' and they might hand me 50 cents."

Cancilla also takes a few of the tame raptors to area classrooms, in hundreds of sessions that aim to educate students about humans' impact on wildlife. She's been at her job long enough to have seen some of these children return as educators and volunteers, who help carry out the center's educational mission to shed light on the environmental issues facing Iowa's birds of prey. Staff and volunteers band every released raptor to monitor its survival in the wild, study bird migration along the Iowa River, create nest boxes to encourage the local American kestrel population, and helped reintroduce osprey to eastern Iowa. 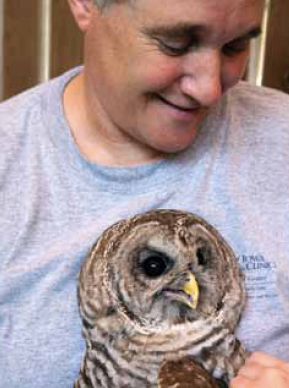 Although the birds they care for are beautiful and awe-inspiring to see up close, volunteers and staff agree that the most rewarding moment comes on release day, when rescued raptors return to the skies.

For the injured red-tailed hawk, that moment arrived one sunny summer day. Although the event happened several years ago, Cancilla still remembers each moment vividly. She placed the hawk in a cardboard box punched with holes and drove to Muscatine, where she met the young man who found the bird. Along with his sister, parents, and grandfather, they stood overlooking a ravine. After a while, they noticed another red-tailed hawk eying them from a nearby tree.

When Cancilla opened the box, the hawk flew straight to that same tree. Shrill calls—perhaps of recognition and joy—filled the air. After a few minutes, the birds glided off together, soaring wild and free in the limitless blue sky. The rehabilitated hawk circled three times above the humans watching on the ground. Then, it was gone.

"Does returning a single hawk back to its world really make a difference?" asks Cancilla. "I'd like to think it does."