Perched on the edge of her seat, surrounded by thousands of screaming wrestling fans in Carver-Hawkeye Arena, Donna Parsons experiences a “Eureka!” moment. The twin passions that define and drive this UI professor’s personal and professional lives suddenly collide.

The revelation explodes in her mind: “Why, the Hawkeye wrestlers are just like The Beatles!”

To fully comprehend this unusual insight, you need to know why Parsons, a lifelong Iowan, has a noticeable British accent. Why one of her courses fills up within hours, and why students languishing on the multi-year waiting list wail, “But I can’t graduate until I’ve taken your class!”

That particular wrestling meet took place in 2009, when Iowa went undefeated the entire season and strode off with both the Big Ten and NCAA trophies. Parsons, 90BM, 93MA, 01PhD, a music and honors professor at the UI, is a proud season ticket-holder and a fixture at just about every Iowa wrestling event. (At the time of this interview, she was ecstatic about getting her tickets for the U.S. Olympic wrestling team trials at Carver-Hawkeye Arena in April.) She inherited this athletic ardor from her father, while her older brother passed along a love for The Beatles. 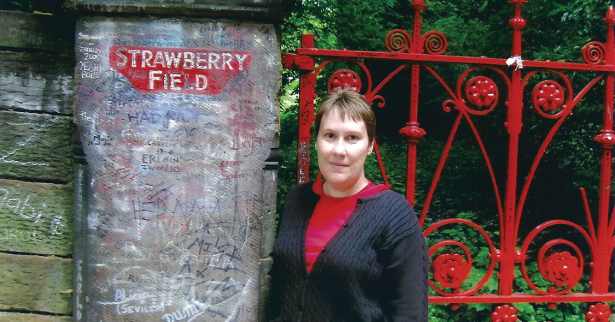 During a research trip to England, UI professor Donna Parsons visited some of the legendary haunts of her idols, The Beatles.

While her peers listened to contemporary artists, Parsons, even as a young girl, immersed herself in the world of the Fab Four. When John Lennon was murdered in New York City in 1980 (on what Parsons now calls one of the worst days of her life), she endured the cruel taunts of her junior high school classmates. Over and over, they mocked, “Hey, Donna, did you know John Lennon is dead?”

Some 30 years later, Parsons can recall much more about The Beatles than just the anniversary of Lennon’s death. After visiting England for 13 consecutive summers to conduct research (that’s where she picked up the British accent), Parsons knows all the ins-and-outs and ups-and-downs of the group’s life, from the early days as an obscure but hard-working band called The Quarry Men to the triumphant conquest of the American music scene in the 1960s.

She’s met the people who knew Lennon in his youth in Liverpool. “That John Lennon was a rascal!” they told her. She can recite from memory the list of all the Beatles’ childhood homes—in fact, she could probably draw a map showing their precise locations, along with the whereabouts of Strawberry Field and Eleanor Rigby’s grave.
She’s literally walked in the footsteps of The Beatles; she’s a human encyclopedia full of facts about their songs, movies, history, and lives.

“Life without The Beatles is inconceivable. They’ve shaped my identity and how I function in the world,” she explains. “Their music is about love and hope. It’s given me an optimistic outlook on life and shown how amazing things can happen when creativity is melded to hard work.”

Seven years ago, Parsons created the now-famous class called “The World of The Beatles,” which examines Beatlemania in the context of American and British history and culture. Although she’s just as knowledgeable about Jane Austen, George Eliot, and similar “serious” artists, Parsons insists that The Beatles are more than worthy of academic study.

“The Beatles’ impact on the development of popular music was as monumental as Beethoven’s was on classical music,” she says. “They changed the world. They raised the bar—and no one has come close to matching what they did.”

Maybe not in the musical world, but Parsons sees uncanny similarities in another, unusual place. Here, she expounds on a hypothesis that winds from Abbey Road to Carver-Hawkeye Arena—a magical mystery tour starring The Beatles and Dan Gable.

Really? Dan Gable and The Beatles have much in common?

Mainly, all roads in their respective domains lead to them. The Beatles are the best-selling band in history; they changed popular music forever, and they’ve inspired countless subsequent musicians. In the wrestling world, Dan Gable is a rock superstar. He defined perfection as a collegiate and world wrestler, and then he redefined it as a coach at the UI.

What made The Beatles so special?

Contemporary artists like Lady Gaga offer occasional flashes of brilliance, but The Beatles are the most innovative, influential band ever. Nearly five decades after they made their first appearance on The Ed Sullivan Show, no other group has arrived on the national scene so fully developed, with music that evolves at such an amazing pace.

The Beatles wrote their own songs, ending the previous separation between musicians and songwriters; they took the lead in the recording studios, challenging the sound engineers to make their unique ideas a reality. Never before had a pop song opened with guitar feedback, featured tape loops or a sitar, or used abrasive guitar distortion.

They were incredibly versatile in their quest for artistic perfection, from the raw energy of their early music, to the flawless live performances, to the groundbreaking studio work that melded symphonic form with rocker mentality.

Dan Gable’s an athlete. How can he possibly compare to a musical super group?

The field of sports is an obvious place to look for examples of excellence, and Dan Gable is an institution in the sport of wrestling. Winner of several world titles and an Olympic gold medal, he left an indelible imprint. His merciless pursuit of perfection defined collegiate and world wrestling; he set the standard that wrestlers across the world still strive to meet. 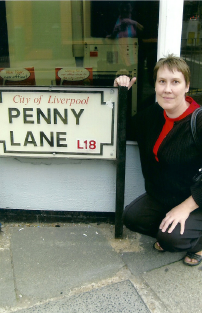 How are their legacies similar?

Today’s youth are still fascinated by The Beatles, as shown by the popularity of the group’s digitally re-mastered albums and their availability on iTunes. Every year at Iowa, students fill my class about The Beatles; afterwards, they go home and listen to the band’s albums with their parents. With their timeless lyrics, catchy tunes, and musical genius, The Beatles connect generations like no other artist or group can.

In the same way, young wrestlers are drawn to Gable. Even after he stopped wrestling competitively in 1976 and retired from coaching in 1997, his eminence has not diminished. Like John Lennon during the years he lived in New York City, Gable walks freely around Iowa City and is approachable. The first time you see him outside the wrestling arena, you wonder what all the fuss is about: he’s so low key, nonchalant, and gracious. Yet, USA Today, the New York Times, and Sports Illustrated still send reporters to Iowa City to write about his accomplishments. Just as The Beatles’ work ethic set them apart from their peers, so Gable trained longer and harder than any other wrestler in the world. As a wrestler he had the drive, desire, and determination that propelled his achievements to what others had once believed were unimaginable heights.

After their early successes, how did The Beatles and Gable find ways to keep growing and challenging the status quo?

The Beatles transitioned from a live band to a studio one without losing a step or even skipping a beat. They always elevated their songwriting and creation of soundscapes to another level. Amazingly, they did it with each album and sometimes from one single to the next.

Gable’s legacy as a coach extended even farther than his accomplishments as a collegiate wrestler. In 21 years, his teams won an unprecedented 21 Big Ten titles and 15 NCAA titles. Gable installed the Iowa way of wrestling: in the center of the mat, in your face, with a focus on take downs, back points and pins, and absolutely no stalling, fleeing, or laying your head on the mat.

Gable’s coaching tree offers yet another testimony to his impact on the sport. Just look at the number of his former assistants and wrestlers who have gone on to coach at the collegiate level: J Robinson (Minnesota), Barry Davis (Wisconsin), Tom Ryan (Ohio State University), Jim Heffernan (University of Illinois), and Tom Brands (Iowa). While each program has its own personality and style, Gable’s imprint is firmly implanted in their foundations.

What were the personal tragedies that inspired both The Beatles and Dan Gable?

When Paul McCartney’s mother died from breast cancer in 1956, Paul turned to music as a sanctuary and a public way of coping with a very private loss. In many ways, John Lennon’s life was marked by death. His uncle George Smith, a father figure, died in 1955; his close friend Stuart Sutcliffe died at the age of 21 in 1962; and Brian Epstein, The Beatles’ manager and another father figure, died from a drug overdose in 1967. As horrifying as these deaths were, it was the untimely death of his mother, Julia, in 1958 that irrevocably altered his life. Julia became John’s muse; music was his way of trying to reach her, as well as coping with his pain and the uncertainty of living in a cruel world.

Gable’s road to becoming an elite athlete was also shaped by tragedy. Just after his sophomore year of high school, his 19-year-old sister, Diane, was murdered in the family home. Like McCartney with his music, Dan turned to wrestling to work out his pain; like Julia, Diane became his muse. He told Sports Illustrated, “I’m going to make her proud. She’s going to be up there looking down and say, ‘Hey, that’s my brother right there.’”

You say that wrestling fans and music fans react in similar ways to their idols. Can you explain?

When The Beatles took the stage, female fans lost all inhibitions; they screamed, cried, and fainted. The same kind of palpable excitement and passionate fans can be found at a Hawkeye wrestling meet. While The Beatles’ female fans threw jelly beans and stuffed animals on stage, Iowa fans throw arm and hand signals at the wrestlers and the referees. People of all ages—from boys to grandmothers— yell instructions; it’s not just that they want their wrestler to win, but to win the Iowa way.

The atmosphere at a Hawkeye wrestling meet is incredibly intense and positive. It’s a powerful, uplifting, and motivational experience—like listening to The Beatles’ music.

What lessons can the rest of us learn from Dan Gable and The Beatles?

Whether attending a sporting event or a concert, we’re inspired by perfection or by seeing the impossible attained. The inner strength and determination evident in vocal and instrumental lines or in a wrestling match provide motivation. They encourage us to push past our personal barriers, to pursue our dreams, to discover our potential. That is the shared legacy of The Beatles and Dan Gable.