Mildred Elliott was a practical sort. A survivor of the Great Depression, she was not wont to waste nor form sentimental attachments to physical things. Those beliefs extended even to her own body.

So, after Mildred's full and energetic life of 97 years ended in 2008, her surviving family members carried out her eminently sensible and unsentimental last wishes. Following a traditional visitation, Mildred's body was transported not to a cemetery or crematorium but to the offices of the University of Iowa's Deeded Bodies Program.

Through this initiative, Mildred and other generous donors provide critical insights into the complexities and marvels of the human body. Even in the 21st century, cadavers remain a vital teaching tool and an indispensable part of medical education and research. Despite technological advances like 3-D computer graphic programs, nothing can equal the ability of an actual human body to teach about its intricate, interrelated system of bones, muscles, tissues, and tendons

As medical colleges are legally prohibited from buying human bodies, the UI is one of many institutions across the country to have set up a deeded bodies program. Each year, more than 800 UI students, researchers, and faculty—from medicine, dentistry, physical therapy, nursing, and other departments across the health sciences—learn from some 250 donated bodies. As they peel back the skin and peer inside, they discover how tough and resilient the human body is, how the liver sits in relation to the kidney, what the heart and brain feel like.

Mildred's daughter, Linda Elliott Sturdevant*, 65DH, 92BLS, who worked with a cadaver during her training at the UI as a dental hygienist, knows firsthand the powerful, educational experiences that a cadaver presents. "You can read about it in a book or see it in a picture," she says, "but you need to see it up close to understand the richness and variation of the human body.

That's one of the reasons Sturdevant plans to become a donor, just like her parents (her father, William, who died from heart disease in 1976, was the first to deed his body). Her daughter plans to follow the family tradition, too. In fact, entire families often decide to donate their bodies. Beyond the practical desire to make one's physical remains useful to others, people find comfort in knowing their deaths help advance medical education and scientific knowledge.

"I'm sentimental about my parents and my memories," says Sturdevant, who lives in Washington. "But I don't need a grave to remember them."

Cadavers have played a part in the university curriculum since the 19th century, although the UI didn't establish a formal deeded bodies program until 1965. In those early days, bodies were sometimes acquired by less savory means; in 1870, the university fired an anatomy professor who led a team of students that dug up a recently buried corpse in Oakland Cemetery for research.

Today, of course, the program is completely legal and above-board, and donated bodies are treated with respect and honor. People who wish to donate their bodies have to provide a signed deed of disposition, complete with the signatures of two witnesses. Now housed in the Department of Anatomy and Cell Biology in the Carver College of Medicine, the program recognizes the incredible generosity of donors. As explained on its website, the program "is sincerely committed to establishing a dignified, compassionate, and comforting relationship with each of its donors and their families."

The deeded body office is located in the basement of the Med Labs building, blank and austere and not much different from most other scientific office spaces on campus. What sets it apart are the U.S. Marine Corps banner hanging on one wall and a huge walk-in refrigerator holding dozens of cadavers. The bodies' presence just a few feet from his desk has never spooked program director Darrell Wilkins, a crew cut veteran who has long since made his peace with the dead. 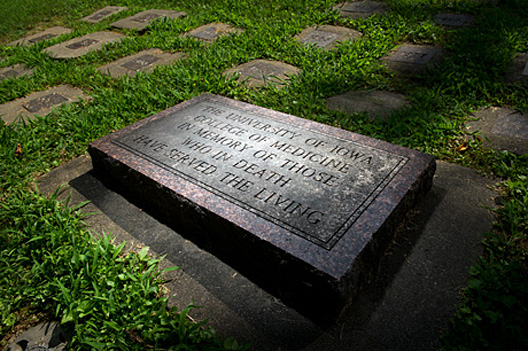 Each year, the UI holds a memorial service at Oakland Cemetery in honor of the people who donated their bodies for medical education and research.

A certified mortician, he has worked with cadavers for decades, including time spent at mass disaster sites helping to identify victims and prepare their bodies for what comes next. He spent weeks at New York City's Ground Zero after the September 11 terrorist attacks and in New Orleans after Hurricane Katrina. This past May, he visited Joplin, Missouri, to help identify tornado victims.

"Some of us are better at handling this kind of work than others," he admits. "I don't think too much about it. I go out the door and leave it behind me."

Wilkins gets about 60 inquiries a month from people—from all walks of life—who are interested in donating their bodies. The first requirement is that donors must be adults. If they died of excessive physical trauma or underwent autopsies or organ removals, their bodies are unusable. So, too, are bodies that had certain diseases or are too tall or obese.

Cadavers are usually used for research for one to two years and then cremated, after which the cremains are returned to the family or interred at Iowa City's Oakland Cemetery following an annual memorial service. The program does no marketing, relying only on word of mouth, and most of the donors are from Iowa or Illinois. Local funeral homes transport the bodies to Iowa City when a donor dies, usually after the family has held a traditional visitation and funeral.

After the funeral, when tears have been shed, obituaries published, and the last of the Jell-O salad cleaned up in the church basement, a subtle change happens to donated bodies. Once in Iowa City, these one-time repositories of life turn into cadavers—specimens for scientific research.

All references to their past lives and identities are wiped clean. They become a number, identified only by sex, age, cause of death, and, if relevant, medical history. Towels and sheets cover body parts until the dissection begins. They are quite intentionally depersonalized so that students and researchers can create some emotional distance rather than seeing their cadaver as someone's parent or child or golf buddy or bridge partner. (Once, though, a student was mistakenly assigned his grandmother's cadaver; fortunately, the error was caught in time to avoid emotional disaster.)

Despite all those contingencies, it's impossible to escape the fact that a dead human body lies on the table and strangers are going to see what it looks like from the inside. For the families of some donors, the thought of their loved one coming to this end is too much to take, and they withdraw the donor's permission.

The students who actually stand at the table can also experience emotional trauma. To get past that psychological block, they can opt for an orientation, visiting the lab in advance to view a cadaver, or meeting with a hospital chaplain for spiritual preparation and help in overcoming their discomfort.

"We say that these donors made a great act of self-sacrifice and, because of their gift, students are going to learn some amazing things about the human body and how it works," says Mary Kay Kusner, a chaplain in the hospital's palliative care unit who specializes in end-of-life issues. The use of cadavers often inspires questions of meaning, she says—who was this person, why did she die, what was her life like?

Kusner encourages students to think through those answers because it helps them learn to become better doctors. "With medicine, it's so much about our heads, but unless we connect our heads to our hearts, we'll never develop as medical practitioners," she says. "These are opportunities to make those connections."

She cautions students not to go too far, though. Some make the mistake of personalizing their cadaver, manufacturing a sense of intimacy. They create stories about the person, their families, their work. As Megan Dean has seen, that just makes it all the harder.

"Students who think about it that way are more weighed down during the dissection," says Dean, a master's student in the College of Liberal Arts and Sciences' Department of Communication Sciences and Disorders. "Especially when they get to the brain, they have a really hard time because of this personal attachment."

Kusner advises students to "always lead with respect and the understanding that this is a body that housed a spirit once, that had a life and connections. But know also that there's a line you can't cross, and that you can't get too attached."

Bryan Brown, a communication sciences and disorders doctoral student, tries to maintain a professional distance. Yet, he felt butterflies in his stomach during his first time in a cadaver lab. "I wasn't fearful, just nervously excited," he recalls. "Like the feeling you get as you reach the crest of an incredibly tall roller coaster."

Of course, moments occur when holes are poked through even the most scientific sense of detachment. Dean was momentarily troubled when she dissected her cadaver's eyes, the windows to the soul, "the most human thing on the body," she says. And the stubble on his face brought back memories. "It reminded me of my grandfather, when he got old and we had to shave him," she says.

It was an important lesson about being human and being alive—from someone who had been both.