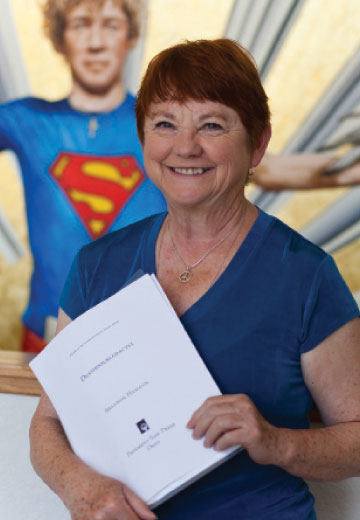 Eloise Hamann writes to her son on his birthday and every holiday. For the past six years, though, he hasn’t written back. A promising young Iowa Writers’ Workshop poet, Shannon Hamann died when he fell off his roof in a 2004 accident.

At the time of his death, Shannon, 86BA, 91MFA, was working to publish his poetry collection and novels. Eloise now carries on the mission to bring his work to print. “It was a way for me to heal,” she says, “something I could do not only for him, but for myself.”

Although his UI professors regarded him as a talented poet, Shannon spent years as a starving artist in New York City. His writing tackled dark subjects, such as child abuse, serial killers, and the Holocaust. He eked out a living on poetry prizes and grants, including the 1995 New York Foundation for the Arts Fellowship and a 2004 National Endowment for the Arts Travel Grant that would have sent him to Japan.

Eloise*, 64BA, a retired San Jose State University mathematics professor, saw publication as a way to immortalize her son. Her efforts echo those of another literary mom, Thelma Toole, who worked for 11 years to publish her son’s novel after his suicide. John Kennedy Toole’s A Confederacy of Dunces went on to become a cult classic and win a Pulitzer Prize for fiction.

Eloise edited Shannon’s work, submitted his poetry to contests, and sought an agent for his novels. Still, the rejection letters piled up. “It was an intimidating process for me,” she says, “and I’m not a woman who’s easily intimidated.”

Exhausting every small press over the course of a few years, Eloise was about to give up when she received a call from Pavement Saw Press. Shannon’s poetry collection, DeathDoubleDactyl, had won the 2010 Transcontinental Poetry Award and will be published this October. Says Eloise, “I wept with joy.”

Eloise hopes the anthology—featuring a cover with an oil painting of Shannon—will stir interest in his novels. She has already self-published his work Brad Pitt Won’t Leave Me Alone, a tragic comedy about a woman who believes Brad Pitt sends messages to her in his movies.

Though Shannon’s poetic voice has been silent for six years, his legacy lives on through his work and a memorial website maintained by Eloise. In chasing Shannon’s dreams, Eloise has also realized one of her own—writing in retirement.

Still, Eloise misses stimulating conversations with her son, whose adventurous lifestyle included climbing trees, hitchhiking across Europe, and taking plenty of risks. “I feared I might outlive him,” she says, “but I still wasn’t ready.”