View All From You
Share
IOWA Alumni Magazine | August 2011
This Old House
By Tina Owen
A project involving the University of Iowa and the city of Iowa City adds a new dynamic to downtown residential areas. 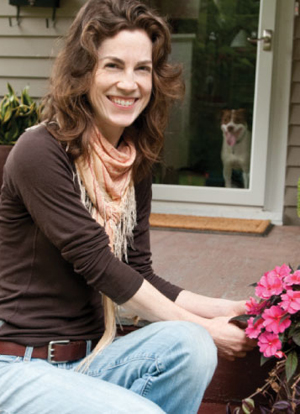 Almost 100 years old, the old house had good bones and retained vestiges of charm and allure. Time and neglect had taken a toll, though. The roof sagged and leaked; the concrete path sprouted cracks and weeds; inside, the battered hardwood floors bore the scars of countless careless tenants, while the kitchen reeked of old meals and mildew.

Nestled in a cluster of rental properties at the southern end of Iowa City’s Governor Street, the home looked like an aging movie star desperately clutching memories of former glory days.

With help from some confident backers and a new owner, though, the historic house is now staging a grand comeback. A few months ago, Jennifer Kerns, 94BS, moved in, with plans to turn the former rental into her “forever home.”

When she first set foot in the house at the start of much-needed renovations, a refrigerator and toilet occupied the middle of the dining room, another major appliance sat abandoned on the front porch, and the whole place was a dirty, chaotic mess. None of that mattered. Admiring the high ceilings, charming dormer windows, and wood floors that reminded her of her childhood home in Iowa, Kerns saw past the grime and the clutter.

“It just felt right,” she says. “It had character; it had soul.”

Kerns, an air quality chemist for the State Hygienic Laboratory at the University of Iowa, purchased the property through the UniverCity Neighborhood Partnership. This joint initiative between the city, the university, and other local institutions gives old houses a new lease on life—and new owners the rare opportunity to live in affordable, quality, conveniently located housing. “There’s no way I could have been anywhere near this close to downtown,” Kerns says. “I couldn’t have afforded anything like this without the program.”

The program buys and renovates run-down former or potential rental properties in neighborhoods around campus, then sells them to income-qualified homebuyers who agree to live there for at least five years. In doing so, it hopes to restore the balance of residents and improve the quality of life in neighborhoods that have gradually been taken over by rental properties.

Priced between $60,000 and $200,000, UniverCity properties range from modest ranches to four-bedroom houses with garages. Buyers can also benefit from free renovations and down payment assistance. For Kerns’ house, the program provided a new roof, more insulation in the attic, refinished floors, and an updated kitchen complete with brand-new appliances. The immaculate restoration of the old home, a rental property for 15 years, won the contractors a Historic Preservation Award. 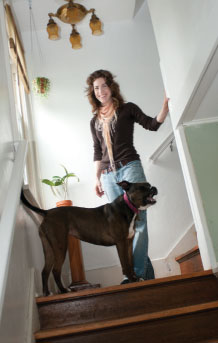 Funding for the program comes mainly from a $1.25 million grant from the I-Jobs economic stimulus project set up by former Iowa Governor Chet Culver. The grant provides up to $50,000 per house toward costs for renovation and big-ticket repairs and purchases such as roofs, kitchens, bathrooms, appliances, and furnaces. That’s another plus of the UniverCity program: it provides work for local contractors.

The initiative also hopes to reverse a demographic exodus that began in the 1950s and 1960s, when suburbs started luring families away from city centers across the nation. In Iowa City, downtown expanded, property values increased, and many residents started getting priced out of “close-in” homes conveniently located near the heart of the town.

Plus, as the university grew, so did a market for off-campus student housing. Splendid old homes became lucrative investment opportunities, either crudely converted into multiple-occupant dwellings or demolished and replaced by cookie-cutter apartment buildings out of character with a neighborhood’s architectural style.

The UI and other UniverCity partners stress that the program doesn’t aim to eliminate the rental culture, but to ensure that neighborhoods remain attractive places to live for both renters and homeowners. While renters undoubtedly infuse old neighborhoods with vitality and diversity, problems can arise. A frequent turnover of residents who lack any real connection to the area, as well as landlords reluctant to spend money on property maintenance, can lead to dilapidated houses, overgrown lawns, and trash-strewn streets. Homeowners in such areas tell horror stories of loud, late-night parties, drunken revelry, and an increase in petty crime or antisocial behavior.

Although such accounts may be over-exaggerated, they’re a real perception for potential homebuyers who may already be deterred by high property prices. Nonetheless, it’s clear that the UniverCity program can attract permanent residents back to these neighborhoods. Since its launch in 2009, the program has sold six restored properties, with seven more available soon. Another 12 houses are slated for purchase and renovation.

During an open house this past April, a charming, two-bedroom cottage with a steeply pitched roof on Fairchild Street attracted interested visitors. Obviously smitten, young couples and single parents wandered around the 893-square-foot home, murmuring about historic details like the transom windows above doors, as well as the modern, efficient kitchen and the practicality of being within walking distance of work, shops, parks, and downtown attractions. A few weeks after that open house, the cottage became home for a qualified buyer.

Just a few years ago, a big old foursquare on Muscatine Avenue was locally renowned as a venue for raucous parties. After its UniverCity transformation, the four-bedroom property stood out for other reasons: a handsome new exterior paint job in coordinating tones of terracotta, tan, and beige, plus interior improvements that included a new kitchen, bathroom, and laundry room, electrical service, furnace, air conditioning, and water heater. Last month, a UI faculty member purchased the property and completed its transition from party house to family home.

The university, the city, and local businesses realize the benefits of investing in such makeovers. In addition to the I-Jobs funding, local banks extended the city a $3 million line of low-interest credit to buy homes for the UniverCity project, while the Iowa City Housing Authority committed another $100,000 in support. The UI allocated $200,000 toward down payment assistance for full-time university employees who meet the program’s criteria.

From the university’s perspective, that’s money well spent, part of its ongoing and critical efforts to recruit and retain staff. A number of other universities across the country, including Harvard, Yale, Ohio State, Minnesota, and Northeastern, successfully operate similar programs to revitalize and improve areas right on their doorsteps.

The university has long been concerned about the “transition zones” around campus, says UI business manager George Hollins. “We want stability in neighborhoods close by, including housing for students that’s cared for and well-kept,” he explains. “These neighborhoods are gateways to the university.”

Although the I-Jobs funding runs out at the end of this year, city officials hope the UniverCity Neighborhood Partnership can become a non-profit, stand-alone project, advocating for homeowners and renters and providing assistance to neighborhoods.

As one of the first buyers in the program, Kerns offers proof that it can work. She’s cut in half her commute to work—by bike. She also feels more connected to the life of the city, able to walk downtown and to the Farmer’s Market, which, as a master gardener, she cherishes.

While she’s thrilled with her new home, Kerns says that the neighborhood probably drew her more than the actual house. Her trepidation about living in the midst of rowdy, inconsiderate renters turned out to be unfounded; she’s been “pleasantly surprised” by the area’s calm, friendly atmosphere.

Permanent residents occupy most of the nearby houses, keeping their homes and yards in tip-top condition. When Kerns sits on her front porch drinking coffee, she receives cheery waves and greetings from neighbors and other passers-by. Far from being unruly affairs, the regular Friday night parties held in one neighbor’s glorious garden are sociable, relaxed gatherings where the only rule is that no one can talk about work.

At night, when Kerns lies in her bed and gazes out the windows, she can glimpse branches of centuries-old oak trees on the opposite side of the street and listen to the soft hoots of the nesting owls. She falls asleep knowing that she’s not only home, she’s part of a community.

While many UniverCity properties can be found in areas that are doubtless familiar to generations of UI students who rented properties along Fairchild, Gilbert, Davenport, Burlington, Lucas, Bloomington, and Bowery Streets, another program area may be less well-known.

Residents of the low- to middle-income Miller-Orchard neighborhood in southwest Iowa City benefited from a partnership with the UI even before they became part of the UniverCity program. In 2008, worried about the closing of a local school, the imbalance of rentals and owner-occupied homes, and the accompanying gradual decline of their neighborhood, they worked with graduate students from the university’s urban and regional planning department to identify solutions. An initial survey revealed that residents believed the best way to improve the area was to increase the number of long-term residents.

With the help of the graduate students, Miller-Orchard residents and city planners developed a comprehensive plan to improve transportation, beautification, safety, and other issues. Impressed with the residents’ determination and commitment, city officials included Miller-Orchard in the UniverCity project. The program turned out to have a positive impact on more than just the few properties selected for renovation; ripples of pride in the community and home ownership spread through the area. One owner completed much-needed repairs on a rental home, while several other residents spruced up their properties.

Overall, the planning process helped unite neighbors around a common goal, bringing them together in an unprecedented way. In an e-mail to the city after the project, Paula Swygard, 75BA, a 14-year Miller-Orchard resident and a longtime secretary in the UI’s Department of Psychiatry, said, “[The program] created a little spark in the neighborhood.”