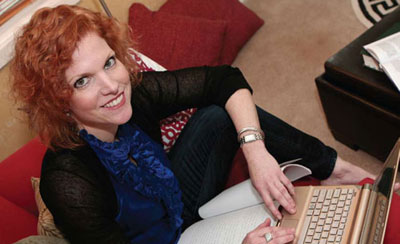 There are a lot of things to consider on your first visit to jail. What will it feel like when they close the gate behind you? Will it be scary? Will it be dangerous? What should you wear?

For Laura Caldwell*, 89BA, the last answer was obvious. And so she walked into the Division 11 "Supermax"—the imposing California Boulevard facility that houses Chicago's toughest criminals—dressed in a pink wool coat and carrying a green alligator purse.

That's probably what Izzy McNeil would have worn, too. She's the sassy, sexy, red-headed heroine of Red Hot Lies, Red, White & Dead, and Red Blooded Murder, the "Red Hot" trilogy written by Caldwell. But, why was Caldwell—an author of light, bright "chick lit" novels—visiting a maximum security jail? Turns out, that's quite a story.

As a University of Iowa undergraduate in the '80s, Caldwell didn't know what she wanted to be after graduation. She immersed herself in college life, especially athletics; she was on the pom squad, developing new and lifelong friends and a rabid appreciation for Hawkeye football. It never occurred to her that she might become a writer—she got a "C" in the one creative writing class she took at Iowa. So, after graduating with a degree in communication studies, she enrolled in law school, like her father and uncles before her.

By 1998, she was a partner at a Chicago firm, specializing in medical malpractice and entertainment law, but she missed the creative work she'd done as a student. A voracious reader, she turned to books for relief. One day, while wandering through the stacks in a bookstore near her Lincoln Park home, she found nothing to pique her interest. She wanted to read about a woman who takesa vacation that changes her life, but nothing like that sat on the shelves. That's when she had a crazy idea: why not write such a book?

Caldwell went out and bought a "thin, pretty notebook" and started to write a fictionalized account of her own trip to Europe with friends after she'd passed her bar exam. She signed up for a writing class, and, with the help of her instructor, wrote her first novel, Burning the Map. Then she wrote another. She'd found her passion.

Eventually, she decided to take a sixmonth break from her law practice to concentrate on writing. By the end of that time, though, conditions at the firm had changed; no job existed for her return. She only had the writing—and still she wasn't getting published. It seemed that her big gamble was never going to pay off.

"It became one of those cautionary tales that people told at bar association meetings," she says. "'Oh, did you hear about Laura Caldwell?'"

Her break came when a chance encounter put her in touch with another UI alumna, Margaret O'Neill Marbury, 86BA, who was starting a new "chick lit" publishing venture called Red Dress Inc. Caldwell had never heard of "chick lit," an emerging genre based on the stories and challenges in young women's lives. She mentioned the mystery she'd been working on, but Marbury wasn't interested.

"So I said, 'Well, I've got this book in a drawer,'" recalls Caldwell, thinking of that first book she'd written when she couldn't find anything interesting to read. She went home, polished up the first few chapters, and sent them to Marbury, who quickly asked for more. Caldwell sent more and then waited. And waited.

Eight months later, Marbury called to say she wanted to buy Caldwell's book. It was a year-and-a-half after she'd stopped practicing law. That first novel came out in 2002, followed by ten more, which have been translated into a dozen languages and published in nearly a dozen more countries. Burning the Map ended up being voted one of the year's best novels at barnesandnoble.com.

"Isn't it crazy?" Caldwell asks rhetorically. Perhaps—but not really surprising. As she admits, "I remember thinking, 'If I can get my foot in the publishing door, I'm going to kick it open.'"

As an established author, who has since turned to mystery and romantic suspense, Caldwell is now in demand for events like the Love is Murder mystery conference in Chicago this past February, where she gave would-be novelists tips for writing steamy love scenes. Just days before, though, she'd testified in front of state legislators, urging them to make it easier for exonerated criminals to clear their records and access mental health benefits.

That's the other part of Caldwell's story—the part where the attorneyturned- author turns back into an attorney. The inmate Caldwell met that day at the maximum security prison was Jovan Mosley, who had grown up in one of southeast Chicago's roughest neighborhoods, but had managed to avoid the thug life that seemed to claim all of his peers. He never joined a gang, never was arrested for any kind of crime. He went to school, then took three buses downtown to his work-study job at a law firm. He thought he might like to be a lawyer.

Until one night, when Mosley was hanging out with some neighborhood boys who robbed, beat, and eventually killed a neighborhood man. Even though witnesses said Mosley hadn't participated in the crime, police picked him up, brought him to a windowless interrogation room, and held him for 29 hours. Sleep-deprived and terrified, Mosley finally told the lie he thought police wanted to hear: yes, he'd thrown a couple of punches in the fight.

Six years later, he was still in jail awaiting trial. Caldwell happened upon the case while researching her mystery novel, The Rome Affair, in which police try to force a Chicago couple into admitting to a murder. Wanting the scene to feel authentic, she asked a longtime acquaintance, criminal defense attorney Catherine O'Daniel, if that kind of thing ever happened in real life. "Oh, honey," she recalls O'Daniel's response. "It happens all the time."

"Cathy had never taken a pro bono case in her life," Caldwell says, "but once she met Mosley, she kept thinking, 'That kid doesn't belong there.'" Similarly moved, Caldwell offered to help, even though she'd never done criminal defense work ("I'd never even tried a parking ticket," she says). It was a risk, a gamble— the kind that had defined her career so far.

"Laura's really driven—when she wants to get something done, she gets something done," O'Daniel says. "She's got good instincts; she brought some good ideas."

Since she'd never done criminal work, Caldwell played mostly a supporting role in Mosley's defense— researching, writing briefs, interviewing witnesses. Still, the pressure was intense: "Ninetynine percent of cases that include a confession in Cook County do result in a guilty verdict," Caldwell says. "How were we going to buck that?"

The eventual "not guilty" verdict was one of the most joyful experiences of Caldwell's life. But it wasn't the end of the story for her client, who was just turned out into the street in the middle of the night—no money, no home, and no support. Mosley may have been innocent, but he was anything but free. 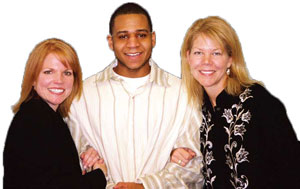 That reality didn't hit Caldwell until a few days later, when she and O'Daniel took Mosley out for lunch. "He was just so overwhelmed," she says. "He couldn't believe that he could order anything that he wanted."

In fact, he had no idea where to begin with his new life.

"Cathy said, 'OK, I did the hard work in the trial; this is your job,'" Caldwell remembers.

The novelist, who'd also been a part-time instructor and lecturer at Loyola School of Law for years, turned to her students for help. In 2009, they began Life After Innocence, helping exonerated criminals rebuild their lives outside prison. It's the first such project that's been accepted into the Innocence Network, an affiliation of clinics working to free prison inmates who have been falsely accused and unjustly sentenced for crimes they didn't commit.

Most of Life After Innocence's clients have been locked up for anywhere from ten to 25 years in prison. Caldwell and her students help with basic skills, like how to send an e-mail and where to get a cellular phone, and much tougher issues like establishing credit and finding a job or a place to live. Mosley—their first client— recently completed his associate's degree in criminal justice and is studying for his bachelor's degree at Loyola. His goal is to enter law school in 2012.

Caldwell's nonfiction book about the experience, Long Way Home: A Young Man Lost In the System and the Two Women Who Found Him, was published last year. Once again, Caldwell had made a leap—this time from breezy stories about young women and thrill-a-minute mysteries to a heavily researched nonfiction work that Chicago Magazine called "part courtroom drama, part Eat, Pray, Love-style memoir, part social injustice exposé."

Despite her first-hand experience with the dark side of the American justice system, Caldwell remains optimistic. "People always talk about the system being broken but I think that's overstating it," she says. "It's a system run by humans."

She prefers to take her cue from Life After Innocence clients, who are just grateful for what they have now, not bitter about all that was taken away.

What's next for Caldwell? Now a Distinguished Scholar in Residence at Loyola University Chicago School of Law, she's got three more novels to write; she's got former prisoners to introduce to 21st century life. Other to-be-discovered projects doubtless lurk on the horizon, but there's no telling what her next gamble will be. One thing's certain: no matter where she goes or what she does—or what she wears—it will be a uniquely Laura Caldwell experience.