View All From You
Share
IOWA Alumni Magazine | April 2011
Engineering Across Cultures
By Shelbi Thomas
UI and French students participate in a virtual team to collaborate on a real-life project. 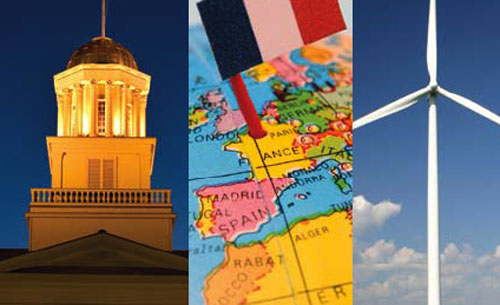 When they walked into the University of Iowa Campus Recreation and Wellness Center (CRWC) this past February, three French students and their advisor experienced—appropriately enough—a strong sense of déjŕ vu.

Even though it was their first time in the building, they immediately recognized the floor-to-ceiling windows on the south side, could recite the exact measurements of the competitive swimming pool, and knew where to look for the Tigerhawk logo at the bottom of the diving well. After touring the center, Thomas Berville, an engineering senior from Polytech Marseille, University of Provence, in Marseille, France, said, "It's exactly as I imagined it."

The French engineers weren't mindreaders or time travelers. Everything seemed so familiar on campus because they'd spent the previous five months working remotely with Iowa students as part of the Virtual International Project Team (VIPT) program. Launched in 1999 by the UI College of Engineering, the VIPT gives Iowa and Polytech Marseille engineering students practical cross-cultural work experience in an increasingly global profession. UI industrial and mechanical engineers also fulfill their senior design course requirement as they partner with French teammates on projects via the Internet, e-mail, and video conferencing.

"We hope students get an appreciation for what it takes to collaborate with people from a different part of the world and a different culture," says Bob Moulds*, 70BSME, retired vice president of engineering for Deere & Company, whose financial support enables the program. "They learn how to work very hard at communication and get things done, despite the built-in barriers of language and culture."

Discovering a common interest in sustainability, the team spent the past semester investigating ways to reduce the energy costs of the CRWC by ten percent. The French engineers conducted a computational fluid dynamic analysis of the center's pool and diving well. Using a computer program to track the path of air molecules, they studied air flow to determine how much the university could save on air conditioning costs by slightly lowering the water's temperature in the summer. To deal with the challenges of working thousands of miles away from their project site, the French students turned to their UI counterparts to provide schematics, take photos, and answer questions about the building.

In addition to providing such support, the UI engineers took on a variety of projects suggested by Facilities Management: from evaluating the placement of occupancy sensors to determining the cost-effectiveness of adjusting air temperatures based on each room's daily use. Students also analyzed whether condensate from the pool area heating and ventilation equipment would be worth recapturing and putting to use in the campus's physical plant.

Whether or not Facilities Management staff adopt any of the students' recommendations, course instructor Dan Mineck says the exercise gave seniors the chance to demonstrate their mastery of machine design, thermodynamics, building codes and standards, energy use, and engineering economy skills.

Furthermore, students learned to communicate effectively with international teammates. The sevenhour time difference between Iowa City and Marseille meant that UI students occasionally had to sacrifice sleep for a 7:30 a.m. video conference call. They also learned to accommodate cultural differences, including the reality that punctuality is less important in France.

Though the group corresponded entirely in English—the universal language of engineering—Iowa undergrads admitted it took awhile for their ears to adjust to the French accents. The team also needed to convert between English and metric units—although they wouldn't have been the first international collaborators to make such a basic error. In 1999, NASA lost communication with its $125 million Mars Climate Orbiter, because two teams used different measuring systems in writing the software that helped navigate the spacecraft.

The UI program briefly set aside the complexities of long-distance communication when the French group traveled to Iowa City. Caught on campus during a blizzard, the French students marveled at how Iowans' daily lives were largely unhindered by a foot of snow. The visitors also left impressed with American student life and campus amenities, such as the dorms, Cambus, and dining services.

During their visit, the French students toured Acciona Energy in West Branch and Whirlpool in Amana, made a presentation at the UI College of Engineering, and enjoyed the lively atmosphere of an Iowa basketball game. They also reflected on the differences in their academic experience, which involves five years of study at an engineering school, rather than a liberal arts university. "Their technical background is strong," says Robin Donegan, a UI industrial engineering senior. "They are good at the math side of things, while we might focus our studies on a business management minor as well."

Because Polytech Marseille and the UI follow different academic schedules, Iowa engineers are working with a new group of French students this semester. Keeping with the green theme, they will explore the viability of adding vertical-axis wind turbines to the roof of the CRWC. Recently, the Philadelphia Eagles stadium became the first arena capable of producing all its own electricity through the installation of solar panels, a natural gas and biodiesel-powered generator, and a few dozen 20-foot-high wind turbines. Students from both sides of the Atlantic have broken into teams to investigate whether a similar idea would be feasible on the UI campus. Among other factors, they will consider zoning regulations, structural support, and cost.

Much of the work is done outside of class, although the UI students meet in a Seamans Center video conferencing board room every Monday to exchange progress updates with their French peers. Julie Wisch, a mechanical engineering senior, says, "We get one shot every week to talk with them, so we need to be prepared."

Preparation in this case means taking turns as project managers, asking the right questions, and keeping on schedule. "In real-life, you won't pull all-nighters," says Mineck, retired vice president of performance engineering and environment for Alliant Energy in Cedar Rapids. "You plan to meet your deadlines, so you're not up at 4 a.m."

Mineck, who became VIPT course instructor four years ago, says he's amazed by the caliber of students who have come through the program. Of the approximately 20 seniors who applied for the experience this year, ten were accepted. "The students are self-starters, highly motivated," says Mineck. "We give them a high-level goal, and they figure out how to implement it."

The class culminates in May when industry experts critique students' final presentations about their VIPT projects. Then, the day after graduation, the UI seniors depart for a two-week trip to France. They'll reunite with their French peers, experience life in a foreign land, and develop the greater sense of cultural awareness that comes with traveling abroad. Mineck says such college experiences "build confidence, so [students] can cope with any circumstance that comes along."

Mineck says the seniors—already a bright and talented group—have expanded their horizons with lessons that will guide them not only in their future profession, but in their everyday lives. So far, students say the program has bolstered their résumés and helped them determine their ideal career path.

In fact, these well-rounded individuals are likely the types of undergraduates that the UI College of Engineering had in mind when it coined its motto, "Where Students Become Engineers…and Something More."