It was halftime, and the Hawkeyes had retreated to their locker room. As head football coach Ray Nagel was giving the players his orders for the second half, he noticed someone was missing. "Where is he?!" demanded Nagel.

Who can blame that football player? In the early 1970s, Lani Jo Gill Flesch, 73BS , was mesmerizing as Iowa's first Golden Girl, the featured twirler with the Hawkeye Marching Band. Her combination of dance, gymnastics, and twirling, along with a dash of showbiz glamour, dazzled crowds and earned her a full-tuition athletic scholarship. Iowa's Golden Girl scholarship still attracts some of the nation's best twirlers.

Flesch started twirling when she was two, practicing hours every day. At the age of six, she won a place performing in the Orange Bowl parade. This Iowa farm girl wasn't daunted—nothing fazed her, then or now. "I've never been scared," she says. 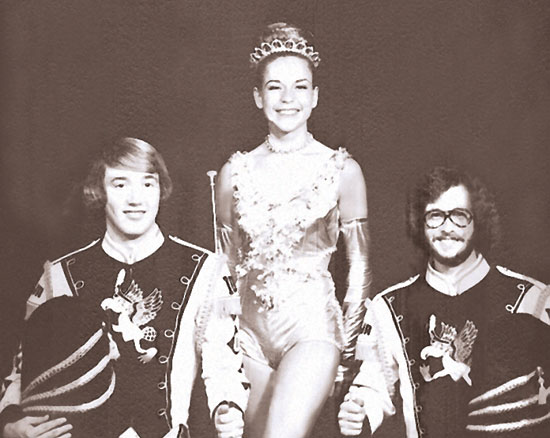 Another of her performances—at an Iowa State football game—attracted the attention of then-ISU band director Frank Piersol, 43MA [deceased], who would later lead the University of Iowa band program. Flesch was only 12, but Piersol later recruited her as Iowa's first Golden Girl, before she had even graduated from high school. As a high school senior, Flesch not only performed with her high school marching band—she was also released from school each Thursday to rehearse with director Tom Davis's Hawkeye Marching Band for Saturday performances.

Flesch remembers clearly how it felt to perform for thousands of fans. "It's a real rush," she says. She wore a metallic gold costume, designed and sewn by her mother, as well as boots, earrings, "fake hair," and lots of makeup.

After earning a degree in elementary education and a teacher's certificate, Flesch went on to teach fourth grade in Illinois, where she met her husband. The couple, now married for 32 years, lives in Libertyville, and Flesch works as a senior program manager for AT&T.

Although Flesch didn't push her twin daughters to twirl, she is grateful for her own experience: "I was able to see the world, promote the art and sport of twirling, and get my education"

If she had it to do all over again, though, she would do some things differently. "I wouldn't do college in four years," laughs the original Golden Girl.