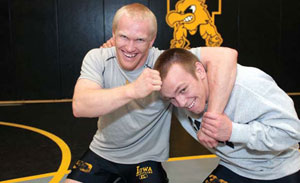 When Luke Lofthouse joined the Hawkeye wrestling team, Tom Brands was in his last season as an assistant coach, the current first-year starters were in middle school, and Iowa hadn't won a national championship in four years.

What a difference seven years makes. Not in one crucial respect, though—Lofthouse, who started at Iowa in 2004, is still here.

Now, this seventh-year senior is married, has a nephew on the team, and will help the Hawkeyes compete for their fourth-straight national title under Head Coach Brands, 92BS. "With Coach Brands, I saw a change in the program," says Lofthouse, who began his collegiate career under Jim Zalesky, 85BGS. "There was an increase in intensity, determination, and focus, and with that came success. It was night and day."

Lofthouse has experienced many dramatic changes at Iowa since he arrived as a three-time high school state champion and Utah wrestler of the year. As a freshman, he lost 15 pounds to compete in the 174-pound weight class, which sapped his strength and contributed to an 8-17 record. Then, the interdepartmental studies major took a break from wrestling to spend two years on a Mormon mission in Zimbabwe. He planted and harvested crops and taught scripture, but he also jumped rope, lifted cinder blocks, and ran to stay in shape. "I put in a lot of effort to get back to where I was [when I returned in 2007]," says Lofthouse. "There were many sore days when it was hard to drag myself out of bed to get to practice."

Lofthouse built himself up again to wrestle at 197 pounds, become a three-time letter winner, and improve his record to 19-13 last year. Although his teammates jokingly call him "Grandpa," Lofthouse says he has earned their respect—not because of his age, but due to his work ethic. "He's a workaholic, he lives his life right," says Brands. "You can look at him and say, ‘There's an example of how you work to get better every day.'"

Lofthouse's family motivates his insatiable drive for improvement. His wife, Allison, whom he met two years ago in Spanish class, is a UI rower who understands the demands of being a student-athlete. The couple works to make time for one another amid early morning practices and evening meets. Luke also has the support of his nephew, Ethen, a redshirt freshman, who has wrestled with Luke since he could talk and provides a competitive brotherly rivalry.

This spring, Lofthouse will make his final appearance at Carver-Hawkeye Arena—not in a singlet, but in a graduation cap and gown. After all this time, he still plans to stay in Iowa City to train for the Olympics or World Championships with the Hawkeye Wrestling Club. "I haven't had the success I've wanted," says the diehard, "but I feel the best days are still to come."