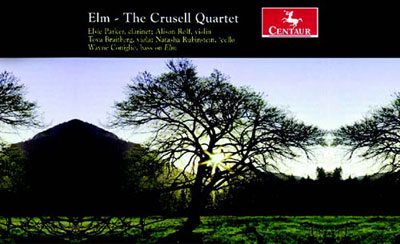 While musical quartets typically consist of two violins, a viola, and a cello, Elm by The Crusell Quartet brings a clarinetist to the forefront.

Elm is dedicated to former quartet member Natasha Rubenstein, who died this past January, as well as Himie Voxman, 33BSChE, 34MA, Parker's UI clarinet instructor, and the late Charlie Eble, 40BA, who ran the Iowa City music store where Parker used to work.

Parker, a professional musician for the Saint Louis Symphony, the Saint Louis Municipal Opera Orchestra, and the Fox Theatre in Saint Louis, also has albums out with her French pop and jazz group, Elsie Parker and The Poor People of Paris.