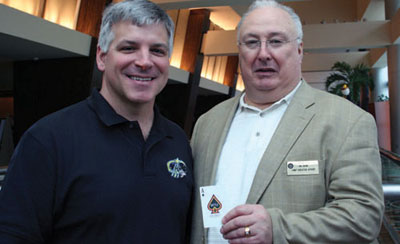 Jay Baum owes his mental acuity, thousands of his friends, and his job to a card game.

In the late 1960s, Baum*, 72BA, learned to play bridge at one of the card tables at the Iowa Memorial Union. Finding bridge to be tricky and fun, he developed a lifelong fervor for the game that led to his current position as CEO of the American Contract Bridge League (ACBL).

Since 2002, Baum has overseen North America's largest bridge organization, which boasts more than 160,000 members. The ACBL determines the recognized rules of bridge, sanctions clubs and tournament games, certifies bridge directors and teachers, tracks player achievements, and promotes the trick-taking game to people of all ages and skill levels.

This year, Baum has helped the ACBL move into its new headquarters in Horn Lake, Mississippi, which includes a museum, library, and hall of fame covering bridge history. The museum includes a 600-piece trump indicator collection, an ace of spades that traveled with an astronaut into outer space, and the TV set for the 1960s program, Championship Bridge with Charles Goren, on which former Hawkeye football coach Forest Evashevski was a guest.

Baum, who has placed second in a national mixed-pairs bridge tournament with his wife, Kathy*, 74BGS, plays bridge for the challenge and to help his memory and concentration. He also enjoys the social aspect of the partners game. "Bridge has been described as social life insurance," says Baum. "You can go to almost any city in the world, and you'll find a bridge club."

Though the popularity of bridge declined with the advent of TV and computers, Baum says the game is making a comeback. Last year was one of the ACBL's best for membership, garnering 15,000 new bridge players. The ACBL has also been active in teaching bridge to the next generation, as studies have shown it improves student performance in math and science.

While the ACBL still oversees three million tables of conventional bridge annually for clubs and tournaments, it now supports an additional 300,000 tables online. "You can play with a partner in Tokyo if you want," says Baum. "We've gotten to the point where the Internet has actually helped the growth of the game."