View All From You
Share
IOWA Alumni Magazine | December 2010
Year In Review
By UIAA STAFF
The UI launches a multimedia annual report.

If a picture's worth a thousand words, how much more can a video tell? The University of Iowa put that format to the test this past fall when it released its 2009-10 annual report. 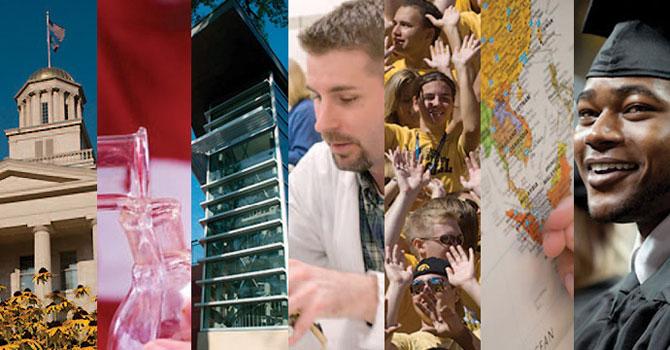 Called "Our Moment," the video is available online at www.uiowa.edu/moment and also airs on the Big Ten Network. The report highlights the people and programs that help shape the university and provides facts and figures that demonstrate the UI's growth over the past year.

A letter from UI President Sally Mason touts some of the year's more notable achievements.

In addition to video segments on university goals, campus improvements, student achievements, discoveries, Iowa's impact on the community, and the future, the report website also features a month-by-month review of the UI's top news. Stories include a tribute to groundbreaking orthopaedics professor emeritus Ignacio Ponseti, who died in October 2009, as well as a recap of President Barack Obama's visit to campus this past spring.

Mason calls 2010 a landmark year and expects even more for 2011. "2010 marked a turning point for the University of Iowa," she says. "Every year produces its share of original ideas and initiatives, but the past year stood out by just about any measure. We set new records, made notable strides in the face of historic challenges, and charted an ambitious yet pragmatic course for the years ahead."