Alarms clatter before the sun breaks the horizon. Up rise the sleepyheads to reach for gold T-shirts and black fleece, sparkly beads and temporary tattoos, perhaps a pair of those crazy striped overalls. Despite the early hour, excitement chases away any fatigue. They pack campers, trucks, and cars with grills, coolers, card tables, and blankets—ready to embark on a fun-filled day devoted to that perennial symbol of fall: the Hawkeye tailgate.

It's October in Iowa. Not too hot and not too cold, but just right. Golden leaves and crisp air replace the last gasps of summer heat. Pumpkins ripen on their vines; apples picked last month from orchards turn to cider. And roars of jubilation rise from in and around Kinnick Stadium, marking the season as much as any offering from Mother Nature.

The hype and anticipation of this season, thanks to Iowa's first-ever Bowl Championship Series win in the 2010 Orange Bowl, brings a heightened energy to the usual scene. Tailgaters stake their claim to premium spots in stadium parking lots, on residential lawns in neighboring University Heights, and other open spaces, hovering over gas flames and smoldering charcoals. By the giant motor-coach over there, a chef in a Tigerhawk apron skewers shrimp kebabs and throws filet mignon on the rack. On a tiny grill here, bratwurst and hot dogs sizzle. Whether fancy or frugal, tailgating produces an unmistakable scent—a distinct mixture of grass, sweat, and BBQ smoke.

Melrose Avenue, now a crowded pedestrian walkway, buzzes with a carnival-like atmosphere. A vendor at one of the most famous food stands screams, "Get your Big-Ass Turkey Legs, get 'em while they're hot!" (Big-Ass Turkey Legs are a well-known Melrose institution. So is meat-on-a-stick. This is Iowa, so, naturally, it's on a stick.)

Ice cubes melt in coolers as warm hands plunge to retrieve beverages. Parents lounge in foldout chairs and watch their children play tag and "duck, duck, goose." UI students kick hacky sacks and toss horseshoes. Groups of alumni gather for mini-reunions—having driven in bumper-to-bumper traffic along the Coralville Strip, Hawkeye flags waving in the breeze, headed for the exact same tailgate spots they first adopted during their college days. They're superstitious about where they tailgate, as if an Iowa victory surely depends upon their proper placement.

To many Hawkeye fans, tailgating is just as important to the football experience as the game itself. Thousands of people never even set foot inside the stadium. Maybe they can't score tickets (for the first time in memory, Iowa sold every ticket to every home game prior to the start of the 2010-11 season) or simply prefer to tailgate. Instead, they keep vigil at their satellite locations, watching the action on portable televisions or listening to radio updates from longtime sportscaster Gary Dolphin.

Lots of tailgaters don't even bother to leave home—they pitch their tents right in their own backyards or driveways from Decorah to Des Moines, Council Bluffs to Cedar Falls. Tailgating is national, too, at IOWA Club game watch events from coast to coast and wherever faraway Hawkeyes can find a place to celebrate. 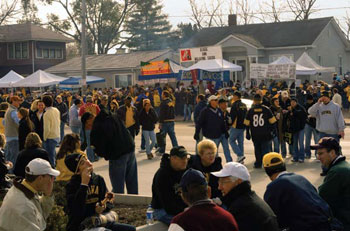 Fall will soon concede to winter and the enthusiasm will continue undeterred. Short-sleeved shirts will give way to warmer hoodies, and then to mittens and hats. Hot cocoa will replace cold drinks. The grills will carry on, becoming perfect little campfires to warm tingling hands.

Exactly why people participate in this tradition year after year is probably as individual as the way they tailgate. Common threads do exist, though. Loyal tailgaters love their Hawkeyes and the University of Iowa. They enjoy a diversion from everyday life and a reason to throw a party. But mostly, it just feels good to pull together for a unified cause, to turn to friends and strangers alike and slap hands after a thrilling touchdown run. In the end, this sense of community fulfills a basic human need.

On football Saturdays, we belong.

Think Before You Drink

Pledging to make the Hawkeye tailgating experience a safer, more enjoyable experience for all, UI administrators have launched an initiative to curb the drinking culture that can mar game day festivities.

"Think Before You Drink. Before the Game. During the Game. After the Game" is the campaign message developed through the collaborative efforts of the UI Athletics Department, the Division of Student Services, and UI Public Safety, among other university and community offices.

The campaign—which follows a city effort to only allow people 21 and over into bars after 10 p.m.—emphasizes safe, responsible, and legal alcohol consumption and seeks to reduce dangerous behavior linked to excessive drinking.

"Think Before You Drink" includes new game day rules as well as increased enforcement of others. Hawkeye fans should be aware that consumption of alcoholic beverages in UI parking lots and ramps will only be allowed for one hour after each game and all tailgating activities must end two hours after the game (defined as the point in time when the majority of fans have left the seating area of Kinnick Stadium).

Police will also exercise increased vigilance with regard to impaired driving and Iowa City's open container ordinance. In addition, police will provide a post-game news release and arrest log to remind fans of the campaign goals.

"Our fans are the nation's best—they are enthusiastic and respectful of others," says Gary Barta, director of intercollegiate athletics. "Many of our fans consume alcohol on game days, and they do so responsibly.

"However, a small minority drink too much and cause problems for themselves and others. To those folks, we say, 'Please think before you drink. Don't put a black eye on the black and gold.'"

Members of the UIAA's Memphis IOWA Club love their food, particularly barbecue. In fact, club barbecue master Tim Theisen has been known to haul his fancy grills hundreds of miles to Iowa City just to share his smoky delicacies with the Hawkeye masses.

If you want to jazz up your tailgate this fall, try Tim's easy recipe for jerk chicken, plus this side dish and dessert. All three recipes can be found (along with dozens of others) in the Memphis IOWA Club's Hawkeye Style cookbook. For more information about Memphis and the alumni association's national network of IOWA Clubs, including game watch details, visit foriowa.org/clubs.

Mix all ingredients, except the wings, in a blender. Put wings in a one-gallon Ziploc bag and pour in the mixture. Marinate four hours (overnight is even better). Then grill.

Beat together butter and sugar until light and fluffy; blend in egg and vanilla. Add combined oats, flour, soda, and salt; mix well. Stir in remaining ingredients. Drop dough by rounded teaspoonfuls onto ungreased cookie sheet about three inches apart. Press two to three additional candies into each cookie, if desired. Bake at 350 degrees for eight to ten minutes or until golden brown. Cool on cookie sheet about three minutes; remove to wire rack to cool thoroughly. Makes about four dozen, 2 1/2-inch cookies.