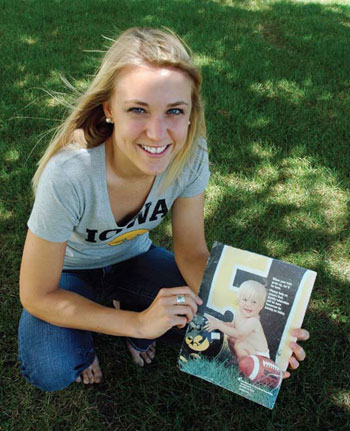 When your kids grow up, we'll be here," promises a UI Alumni Association advertising campaign that appeared in the 1990 football programs.

Sure enough, the UIAA kept its word. Lindsay Holzhammer, the one-and-a-half-year old baby featured in that ad grew up and is now a UI communication studies senior who also works for the UI Foundation (which shares a building with the alumni association). Born into an Iowa family, Holzhammer recalls many fond childhood memories, such as singing the "Fight Song" with grandpa Bob Holzhammer*, 49BSC, a former UI basketball and football announcer, while bouncing on his lap.

A copy of the ad—framed and signed by Hayden Fry—hangs in David and Jean, 83BS, Holzhammer's Iowa City home to remind them that their little girl was always meant to be a Hawkeye.