In Haiti, a man with legs swelled up like grotesque balloons struggles to walk. Parasitic worms have burrowed in his body, hardening and cracking his flesh. Stricken with elephantiasis—a disfiguring disease that affects 120 million people worldwide—he awaits a cure from his misery.

Miles away in Iowa, patients in the UI Hospitals and Clinics pulmonary ward endure a persistent, hacking cough, a constant struggle for oxygen, and the threat of repeated infections. Their physician believes she's discovered an innovative way to alleviate their symptoms, and she appeals to the U.S. Food and Drug Administration (FDA) to begin a clinical trial.

In both cases, the possibility of relief and recovery rests with experimental medication. Pharmaceutical drugs lie at the heart of modern medicine and the fight against painful or deadly diseases that range from arthritis and diabetes to AIDS and cancer. New medicines offer a promising change in the course of treatment for certain illnesses and a dramatic increase in the chances for recovery and survival.

According to the Pharmaceutical Research and Manufacturers of America (PhRMA), the life expectancy for cancer patients has increased about three years since 1980 and the AIDS death rate has dropped more than 70 percent since 1995—both largely due to pharmaceutical breakthroughs. So far this year, the FDA has approved 14 new drugs that will bring hope to patients with conditions ranging from osteoporosis to emphysema and multiple sclerosis to prostate cancer.

Major manufacturers such as GlaxoSmithKline and Pfizer spend decades and billions of dollars on research and testing to bring new drugs to the market. Ten thousand potentially promising compounds may eventually yield only one final product. Every new drug must go through the research and discovery process, obtain approval for human testing, pass three phases of clinical trials, and then be reviewed and approved by the FDA for commercial production. Meanwhile, patients long for what could be the next miracle cure. 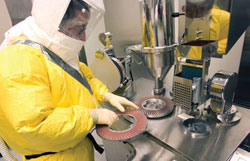 While major manufacturers make headlines for their discoveries, new treatment options also come from the work of smaller medical research companies. Often, though, these companies can't afford to invest in their own facilities, staff, and equipment. That's where UI Pharmaceuticals comes in. For more than 35 years, this organization has helped a variety of pharmaceutical and biotech clients bring their ideas to life. Tucked away in the Pharmacy Building, UI Pharmaceuticals stands alone as the only comprehensive university-based drug manufacturing lab in the country registered with the FDA. Its scientists develop, test, and manufacture drugs in a variety of forms and for various purposes, but with one common goal: to relieve human suffering.

The department traces its history back to 1905, when the College of Pharmacy began making soaps, flavorings, and cleansing agents exclusively for the UI Hospitals and Clinics. Today, Pharmaceuticals handles approximately 40 clients each year, including lone innovative researchers, NASDAQ and New York Stock Exchange-traded companies, government agencies, and other research institutions.

Each year, the division produces more than 120 batches of pharmaceutical products. Most big-name manufacturers churn out mass quantities of one drug on their production lines, but that's not the case at Iowa. Instead, lab staff produces a range of medicines in all phases of drug development—from initial testing in humans to commercial production. "We've grown organically over the years," says Director Mickey Wells, 87BSPh, 90PhD. "For someone to recreate what we have overnight would be a massive undertaking.

and steel-toed boots. Attached to tubes providing air, they measure toxic powdery substances down to the exact milligram, while three colleagues scrutinize their every calculation.

When they compound potent or toxic substances, they have to take several precautions to ensure no dangerous chemicals escape. After exiting the lab, they pass through three separate rooms and take two showers before dressing. Each room has to be thoroughly cleaned afterwards and lab uniforms thrown away.

Such attention to detail earned UI Pharmaceuticals registration with the FDA in 1974 to use "good manufacturing practice" to produce clinical supplies. The government regulatory agency holds the lab to the strictest of standards to ensure that its products aren't noxious to humans, work as advertised, and that their benefits far outweigh any side effects that may occur.

To ensure the quality and safety of their products, Pharmaceuticals staff members have to follow more than 700 standard operating procedures. They have precise instructions on the most basic tasks—what to wear in the lab, how to operate equipment, and even how to use a towel. A simple order such as "clean the mixer" requires detailed explanation, while other procedures can stretch to 15 pages of rules and regulations.

Every drug begins with a recipe—which can extend to 30 pages—called a batch record. Far from the eggs and flour needed for a cookie recipe, they require ingredients such as titanium dioxide and placebo powder. Each blueprint includes the amounts of each ingredient needed, a step-by-step guide on how to make the drug, and the names of the pharmaceutical scientists who performed, checked, and quadruplechecked each step. The records fill an extensive archive, which federal inspectors may use to retrace or recreate actions taken in the manufacturing area.

In addition to accreditation by the FDA, UI Pharmaceuticals undoubtedly benefits from its connection to the university. Customers appreciate the knowledgeable and experienced staff, as well as the newly formed UI Pharmaceuticals Development Consortium, a partnership with College of Pharmacy instructors that enables faculty members to add their expertise into the mix. 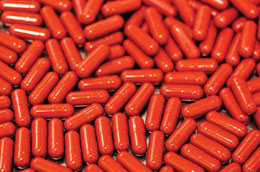 Lakshmi Durairaj*, 03F, 04MS, 05MS—the UIHC physician conducting a clinical trial to help her patients fight pulmonary infection—turned to the lab for just this reason. After seven years of drug development, she has created a food additive that could reduce or prevent major lung infections in her patients. Durairaj approached Pharmaceuticals a year ago when she received funding to begin a clinical trial. Within two months, the lab had created the first batch of her life-changing remedy.

Durairaj continues to rely on Pharmaceuticals' expertise as she moves through Phase II of the FDA's drug approval process. For the next two years, the lab will test the food additive's shelf life by sitting it out at room temperature for various amounts of time. Meanwhile, Durairaj can offer a new treatment option to the 60 patients enrolled in her clinical trial. At Phase III, Pharmaceuticals will help her package the drug for use among 300 to 1,000 patients across the country. "Investigators like me can be unfamiliar with the FDA regulatory process," says the UI assistant professor of internal medicine, "so it's important to work with someone [like Pharmaceuticals] who knows all the rules."

In light of Iowa's reputation, the Centers for Disease Control and the World Health Organization also chose the lab a few years ago to help their fight against elephantiasis. Pharmaceuticals staff created a low-dose version of preventative medicine that could be added to salt, ensuring a simple and effective way to take action against the disease-causing parasite at every meal. The UI experts even took into account the unusual conditions in Haiti. Knowing that the impoverished country lacked a reliable electricity supply, they figured out a way that the medicine and salt could be combined using a cement mixer.

Although the two health organizations ultimately didn't implement the program, a study of 5,000 people showed that Iowa's product was highly successful in eradicating elephantiasis. While lab staffers are proud of that work, one of their greatest accomplishments in the past five years has been two anti-cancer sterile injectables currently on the market.

Randy Yeates*, 86BSPh, 98MBA, Pharmaceuticals assistant director of business development, often hears physicians discuss popular medications that he personally had a hand in making. "It's fulfilling to see a drug that we've worked on make it to market," he says. "A number of our products have had a tremendous impact on cancer and other diseases."

In 1945, the UI made a notable contribution to human health when UIHC physician William Paul developed buffered aspirin and the over-the-counter antacid tablet. Revolutionary at the time, they seem such simple concepts compared to modern ultra-sophisticated drugs and gene-targeting treatments. Yet, the future of pharmaceuticals could prove even more exciting. Today, companies are exploring completely new concepts in treatment, such as personalized medicine, which customizes a drug and its dosage to meet the patient's individual needs. Already, scientists have designed a breast cancer treatment that's tailored to a particular gene.

Whatever the future holds, UI Pharmaceuticals scientists wait in their sterile labs, gloved and suited, ready to help bring about the next breakthrough in modern health care.

A History of UI Pharmaceuticals

1905—The College of Pharmacy begins dispensing medication and making various non-drug products for the University Hospital.

1917—The college produces "bootleg" aspirin during World War I when Germany threatens to cut off its supply of the drug to America.

1928—The College of Pharmacy Drug Service forms to manufacture a variety of pharmaceutical products for the hospital.

Early 1960s—Drug Service changes its name to the College of Pharmacy Division of Pharmaceutical Service and greatly expands its operations.

1992—The College of Pharmacy forms the Center for Advanced Drug Development (CADD) to provide contract analytical services to external clients.

2008—Pharmaceutical Services and CADD merge into UI Pharmaceuticals, which has offices in the Pharmacy Building and in the UI Research Park.

2010—The College of Pharmacy celebrates 125 years.

Join our email list
Get the latest news and information for alumni, fans, and friends of the University of Iowa.
Sign up now
Related Articles
Iowa Research Shows the Importance of Giving Your Brain a Workout
Exercise maintains key brain connections that could lower the risk of Alzheimer’s as we age.
Former Hawkeye Rower Amplifies Her Story of Hearing Loss
A new podcast series focuses on pediatric audiologist Katie Radasevich Farnsworth, an Iowa alumna who went from patient to clinician.
Ask an Expert: What Have We Learned About Long-Term COVID?
Iowa physician Alejandro Comellas explains what doctors are seeing at UI Health Care’s Post-COVID Clinic.
Former Iowa Athlete Launches GoodOnYa Organic Health Food Brand
Autoimmune disorders lead field hockey star Kris Fillat Buchanan on a quest to promote healthy eating.