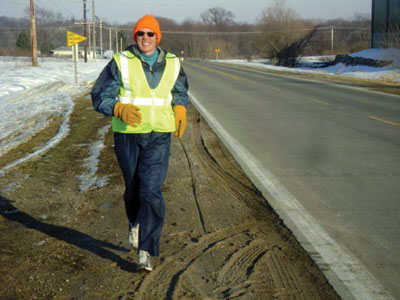 Tim Phillips has traveled the globe, worn out 150 pairs of shoes, and ended up in the hospital a few times—all in pursuit of one of his life's goals.

But, while Phillips' journey has taken him to the Great Wall of China, the Himalayas, and Cuba, none of these experiences measured up to the milestone he reached a mere two miles from home: Phillips logged his 100,000th running mile this past spring in Hiawatha, fulfilling a goal he set as a teenager.

Phillips began his commitment to running at age 14 after an injury ended his basketball career. Two years later, he read about a man who ran 100,000 miles in his life and dedicated himself to the same objective. Phillips, 72BS, has since kept a running log to track his progress.

He aimed to reach the 100,000-mile mark by his 60th birthday this past fall, but several setbacks delayed his arrival at the finish line: he tore his Achilles tendon in 2001 about halfway into a 275-mile run across Iowa, and a couple of bike accidents also kept him hospitalized for a few weeks.

Not much slows Phillips down, though, including his routine 4 a.m. wakeup time and the below-zero wind chills he's willing to endure during Iowa winters. In fact, he enjoys the sense of freedom that comes from his daily six-mile runs.

Phillips has raced in everything from ultramarathons to the Iowa Senior Olympics, but his most memorable running experiences took place during short-term Christian mission trips overseas. Through these travels, he's scurried across more than 20 countries, including Thailand, Cambodia, and many places in Eastern Europe. This past winter, he ran across remote stretches of northeast India in the shadow of Mount Everest.

Phillips didn't do much to celebrate his latest running milestone, other than go out to eat with his wife, Pat. Instead, the heavy equipment operator for the Cedar Rapids/Linn County Solid Waste Agency has set his sight on larger goals. Short-term, he'd like to enter more 24-hour races and finish his run across Iowa in memory of his younger brother who died of muscular sclerosis.

Long-term, he probably needs to invest in more pairs of running shoes. Adds Phillips, "It's taken me 45 years to make it this far, but I'd sure like to do [another 50,000] miles."