View All From You
Share
IOWA Alumni Magazine | August 2010
One Cool Engineer
By Shelbi Thomas
Tim Brenner has worked as a safety manager in one of the most dangerous places in the world.

So hazardous is this remote area that Brenner had to undergo a thorough physical exam and training sessions, take high altitude medication, and wear extreme cold weather gear to survive where temperatures in the "warm" season range from zero to minus 40-degree Fahrenheit. "The sun is always out, 24 hours a day, in the summer," says Brenner, 98BA, 04BSE , who traveled more than 72 hours—including on military planes—to reach Antarctica. "There's snow everywhere, so it's extremely bright, and you can't imagine how cold it's going to be or how your body will react to the thin air." 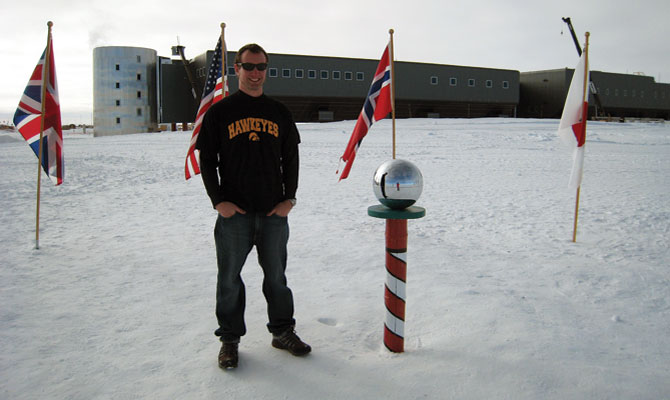 Brenner spent the summers (November through January) of 2007-08 and 2008-09 in the South Pole as part of the IceCube Project, a National Science Foundation-supported effort to build the world's largest neutrino telescope. Brenner and other engineers worldwide embedded sensors a mile-and-a-half underground in pure ice, which is an ideal medium for revealing the blue light emitted when a neutrino from space collides with an ice atom. Scientists can then use the data to retrace the subatomic particle's path to gamma ray bursts, black holes, or exploding stars. Their research could shed light on the nature of the neutrino and the origins of dark energy and dark matter.

Brenner first became involved in the IceCube Project in 2006 as a quality assurance engineer for the University of Wisconsin, where he tested and inspected the sensors that would be shipped off to the South Pole. He later visited the bottom of the Earth to conduct safety audits, help install the detectors, and ensure that workers took precautions with life-threatening equipment like the scalding hot water drills used to blast through the ice.

Although Brenner now works as a quality assurance engineer for the Southwest Research Institute in San Antonio, he still keeps up with the IceCube Project. Construction of the neutrino telescope should be completed within the next year, after which 35 laboratories in seven countries can share the data. Brenner says IceCube may lead to all sorts of unexpected applications. "You never know what we'll find," he says. "We have a new tool [to explore the universe]—another piece of puzzle in place."