View All From You
Share
IOWA Alumni Magazine | August 2010
What a Save!
By Mitch Smith
Amanda Zust, 10BA 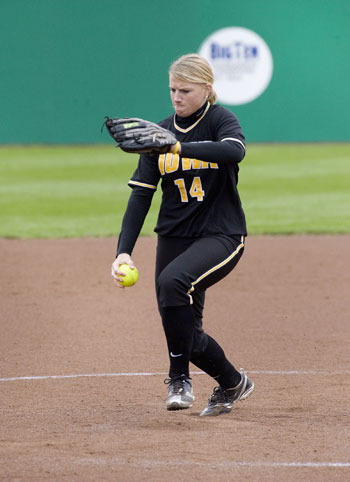 Amanda Zust's four career saves are nothing compared to the one she made off the softball diamond. This past spring, the Hawkeye pitcher donated bone marrow to her brother, Robbie, who'd been diagnosed with acute lymphoblastic leukemia. Robbie, also a UI student at the time, had discovered his illness after attempting to donate plasma. Of his two sisters, Amanda turned out to be the perfect match as a donor.

Amanda was driving home from practice when she first heard the news. "At first, it was a shock," she says, remembering the phone call from her mother. "You hear of other people going through it, but until it hits home, you don't really realize what it feels like."

Quitting softball never crossed Amanda's mind, as she felt that walking away from the sport she loved would be letting her brother down. "That was never an option," she says. "Giving up would be giving up on him, too."

Always close (Amanda was one of the reasons Robbie had chosen to attend Iowa), the siblings developed an even stronger bond during this experience. "They kid around a lot and poke fun," says their father, Joel Zust. "A week before the operation, Robbie would tell her to ‘take care of your stem cells. Go home, and go to bed.'"

This past April, Amanda spent some five hours donating marrow cells, sitting in a room at UI Hospitals and Clinics with IVs in both arms. Although new technology for collecting bone marrow makes the procedure much less harrowing than it used to be, it's still arduous. It didn't faze Amanda, though. Only two days later, the 14-game winner returned to the softball diamond, playing for the Hawkeyes during their two-game road series at Penn State.

After graduating from the UI this past May, at the end of what she calls "an emotional roller-coaster ride" year, Amanda became an assistant coach at her former high school in Des Moines. Throughout her final season with the Hawkeyes, she'd worn a "Rooting for Rob" bracelet. With her brother on the road to recovery, Amanda's sisterly love seems to have paid off.

Head coach Gayle Blevins says it took a lot of courage for the pitcher to stay focused during the season. "Adversity really does shape you as a person," she says. "I'm sure this experience forced Amanda to find strength she probably didn't realize she had."