View All From You
Share
IOWA Alumni Magazine | August 2010
The Art of Science
By Kathryn Howe
An interdisciplinary course considers these two fields a match made in the heavens.

Bright star clusters, illuminated stretches of gas and dust, and remnants of supernovae paint a galactic portrait in the sky. In the image—which graces the class poster for this UI graduate art seminar— NASA astronomers have merged pictures from the galaxy to stunning effect.

The beauty, mystery, and expanse of the universe often stir appreciation and emotion in the beholder—a photo from the cosmos proves as lovely and meaningful as any painting or sculpture, as much at home in an art gallery as in a space laboratory. Though NASA's chief purpose for collecting such images is scientific, the artistic merit is undeniable.

In their spring 2010 seminar, "In Visible Light," professors John Freyer and Cornelia Lang hoped their students learned to appreciate that art and science are not mutually exclusive, but rather two fields that naturally complement and enhance each other.

"In our culture, there's long been a divide between art and science," says Lang, an assistant professor in the Department of Physics and Astronomy, who believes there's a collaborative movement afoot between the disciplines to address this gap. "Scientists aren't expected to understand literature or poetry. Artists are supposedly math phobic. But it doesn't have to be that way."

Each semester, the School of Art and Art History in the College of Liberal Arts and Sciences offers a graduate seminar available to students from all disciplines. Freyer and Lang, both neighbors and friends, arrived on the inspiration for this spring's topic through several conversations about the parallels of their work. Freyer, 02MA, 03MFA, an assistant professor in the School of Art and Art History, and Lang realized their specialties possessed one obvious common denominator: photography.

While artistic photographers like Freyer work with visible light that the human eye can see, astronomers like Lang must employ other parts of the electromagnetic spectrum—such as invisible infrared and X-ray—to capture pictures of the center of our galaxy. They noted their shared familiarity with special sensors called CCDs, light-sensitive devices that not only improve shots taken by digital cameras but are also used in telescopes to help astronomers see more clearly and deeper into space—thus revolutionizing the results produced by both photographers and astronomers. The professors ultimately combined their experiences with light and imaging to offer students a course that examines the links among photography, science, and the visual arts. 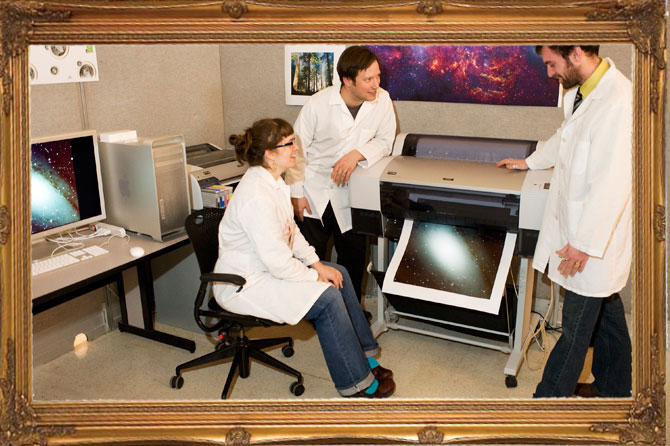 The seminar didn't limit class discussion or projects only to astronomy and photography. Instead, these areas served as a springboard for exploration into all manner of overlaps in science and art. The 14 graduate art students (chiefly from the photography program) considered the work of historical and contemporary artists who blend science and technology in varied ways.

Freyer offers one such example of the early partnership between science and art: the famous 19th century photographic series "Horse in Motion" by Eadweard Muybridge. These sequential images proved that all four hooves leave the ground when a horse is running—a discovery that turned scientific theories and research about animal locomotion in entirely new directions. Beyond this, the innovative photographer's effort at capturing a horse in full gallop helped lead to motion picture cameras—and eventually to modern cinema.

Students also studied the relationship between disciplines through assigned readings from books such as Artscience: Creativity in the Post-Google Generation, which highlights scientists who have connections to art and artists who cross over to science. In one engaging chapter, MIT electrical engineering student Diana Dabby, also a concert pianist and composer, imagines how she can use mathematical chaos theory to create new and exciting musical variations.

As a required part of the course, students also collaborated with faculty members in a science field on an art project and part of their final portfolios. After first interviewing psychology professor John Spencer to create a basis for her project, student Allison Welch developed a plan to feature photographs of familiar objects. Spencer researches spatial perception (as well as attention and working memory), and Welch's idea of taking pictures of nightstands fit well with a project that two of the professor's colleagues were already working on to assess how children and adults place objects on a table. Spencer says Welch shed new light on the research when she observed that the placements of the pieces could indicate each object's meaning to a particular individual.

Adds Spencer: "Creativity and insight are underestimated in sciences. When science and art work together and serve as inspiration to one another, it can be really productive."

Welch says, "I never thought of working with the sciences before. That work's being done across the Iowa River—I thought it had no connection with my own work. It's quite the opposite."

Whatever projects they pursued—from engineering to computer sciences— students were expected to make art in response to a scientific topic. One student whose photography artwork centers on the human body partnered with a professor in the anatomy department to compile a book collage of historical images that reflected their cross-disciplinary exercises. Another student who came across a collection of her own baby teeth at her mother's house contacted a dentist to identify the teeth and put them back together in model form. Next, she recorded her own dental appointment to create an audio-visual piece titled "Cavity."

The class instructors also gleaned a great deal from this unusual experiment. For her part, Lang says she appreciated being able to work with graduate students from areas outside her department and gained insight into how artists view the culture of science. Freyer learned more about the technical aspects of light and its many applications in photography.

Because they believe so strongly in the importance of the art-science perspective, Lang and Freyer hope the course can one day become a general education offering on campus.

"Students have this opportunity to look across the university and find out the kinds of resources available that we didn't even know about," says Freyer. "It's really about building bridges between the arts and sciences."

This article is based on a story that Ashton Shurson, 10BA, wrote for the UI's fyi publication while an intern this past year with University Relations.

Join our email list
Get the latest news and information for alumni, fans, and friends of the University of Iowa.
Sign up now
Related Articles
Iowa Archaeologist and Bible Expert Robert Cargill Digs for Meaning
He might be a renowned archaeologist who appears frequently on TV as an expert on everything from ancient Jerusalem to Ancient Aliens, but University of Iowa biblical studies professor Robert Cargill connects most with his students who have unanswered questions.
The Lonely Planet: An Iowa Researcher's Simulated Voyage to Mars
Sociologist Inga Popovaite learns lessons in gender, space, and isolation at the Mars Desert Research Station.
At the UI Museum of Natural History, a Paradise Not Yet Lost
Iowa experts race to save one of the world’s few remaining cycloramas, which depicts the endangered bird haven Laysan Island in its heyday.
Iowa Alumna and Microsoft Innovator Offers a Window to Tomorrow
Kelsey Huebner discusses the future of the internet, metaverse, and AI.