View All From You
Share
IOWA Alumni Magazine | August 2010
Become A Hawkeye
By Shelbi Thomas
"Fight, fight, fight for Iowa…" 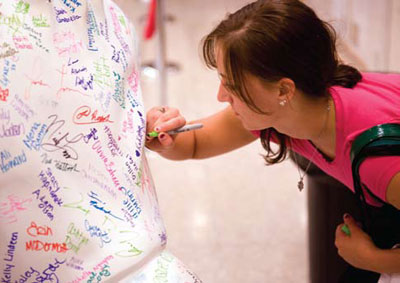 PHOTO: TOM SCHOON Every summer, thousands of high school graduates and their families roam the UI campus carrying black-and-gold orientation folders and yellow bookstore bags—and all their hopes and fears.

The words burst from the mouths and hearts of hundreds of students packed into the main lounge of the Iowa Memorial Union. This is no ordinary rendition of the "Iowa Fight Song," though. For members of the Class of 2014, just several weeks shy of being official Hawkeyes, the stirring anthem represents the fulfillment of a long-held dream.

At this orientation session in late June, incoming freshmen and their families are about to embark on the next chapter in life.

When UI admissions director Michael Barron describes the Class of 2014 as the largest in history, conversation explodes in the room. Students who make up the 4,450-strong incoming class are proud and excited—and anxious. Their minds race: Where will I live? Will I get into classes for my major? HOW WILL I MAKE FRIENDS? 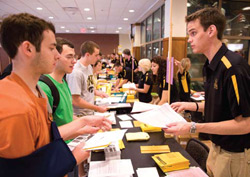 In this first session of the summer—filled with more people than the typical Iowa high school— students and parents will discover answers to their most pressing questions about the university. A humorous welcome video called "The Amazing Race: UI Edition" sets the tone and introduces students to their objectives for the two-day orientation program: to meet new friends, create a class schedule, and become involved on campus.

After rousing school spirit with the Fight Song, orientation advisors storm the IMU stage. Only a select few students have the boundless energy essential for the "O-Team." They work one-day orientation programs throughout the year, but in summer they pick up the pace with 15-hour days, twice a week. By the end of the first program in June, team leader Liz Alonzi* has lost her voice. 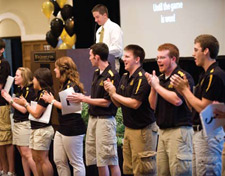 Along with the other 40 members of the O-Team, Alonzi has undergone an extensive training course. The team memorizes the UI's handbook of policies and procedures, role-plays possible orientation scenarios, and accumulates a pile of facts—from the admission requirements of the College of Engineering to the number of feet construction workers moved Calvin Hall across Jefferson Street in 1905. As Alonzi says, "We need to know literally everything about the university." 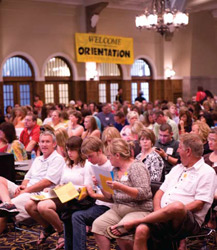 Despite their in-depth knowledge about topics such as parking, roommates, and academics, even the O-Team can be surprised—and occasionally stumped by questions. One parent asks about laundry service. Another inquires about a personal assistant to wake up her son for class.

Still, advisors encourage students and parents to ask anything. Alonzi says that's what motivated her to become an orientation advisor: "The idea that I could help someone so much that it could make or break their first semester—that I could impact their lives—was a big deal for me."

With its motivational videos, well-trained staff, and highly organized schedules, orientation may seem like a modern concept, but it's actually been a staple of UI life for at least 80 years. From the 1930s through the 1970s, freshmen would gather in the Field House for the fall mass meeting—a precursor to today's Welcome Week. The marching band played, the university president spoke, and then freshmen would meet their upperclassmen mentors at a faculty member's house. 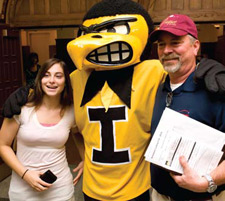 As enrollment grew in the early 1960s, orientation programs extended into the summer, when students met with faculty advisors and registered for courses. The O-Team has been a campus tradition since 1968. In 1972, the current two-day program for parents and students began. Also starting that year, the Iowa City Chamber of Commerce welcomed newcomers by serving chicken cooked on an open pit near the Iowa River. "It was a tradition for a long time," recalls Senior Associate Director of Admissions Emil Rinderspacher*, 70BA, 74MA. "The whole city smelled of barbecue smoke."

This year, for the first time in orientation history, freshmen registered for courses online on computers across campus, saving an estimated 400,000 sheets of paper. Today, students meet with professional academic advisors rather than faculty. Orientation groups also break down by major, so that student leaders who share freshmen's career interests can offer perspective on required courses. 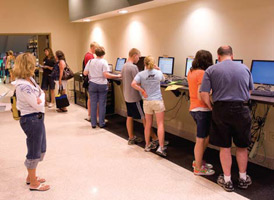 Academic advisors recommend the "Courses in Common" program, which places the same group of freshmen in several courses together during the first semester so students can bond, feel comfortable in large classes, and study together. Advisors also encourage freshmen to take classes outside their majors to explore their interests.

"In high school, I knew all my teachers and their spouses and kids," says incoming freshman Natalie Melloy. "I want to step out of my comfort zone to make personal connections with my college professors, so that I can ask for help in a big class."

As students make the challenging transition from high school to college, advisors work to keep them from becoming overwhelmed. They set out some basic guidelines: build a reasonable schedule and know what professors will expect. "I could get by without studying in high school," admits Melloy, "but I know that college is going to be a lot more work."

Of course, student life involves more than classes, books, and tests. University studies show that undergraduates who get involved on campus adjust better to college life and are academically more successful. 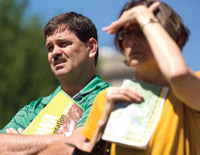 To encourage friendships to flourish, the UI admissions and housing offices set up Facebook groups for incoming students and their parents. On these social networking sites, students can connect and receive answers to questions, from "What should I bring to college?" to "Is anyone else in Daum?"

Even before they meet in person in Iowa City, many incoming freshmen have already bonded with new friends—virtually, anyway. Freshman Cassidy Franklin found her first college buddies through Facebook, met them during orientation for ice cream on the Ped Mall, and then made plans to attend a Chicago White Sox game.

Since many freshmen travel far from home for college and know few people at Iowa, these programs help students quickly become a part of the UI community. Even those who do have classmates attending Iowa benefit from the opportunities. First-year student Alex Bernstein says, "I want to branch out and make lasting relationships." 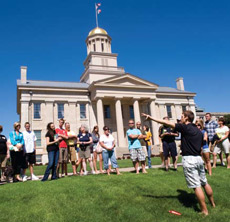 One of the best ways to do that is through extracurricular activities. As part of the Iowa Challenge to engage and serve their community, members of the Class of 2014 line up in the IMU to scrawl their names on a Herky statue. On the second day of orientation, they put their promise into action at the Iowa Information Fair, where they can sign up with campus organizations to volunteer their time for Habitat for Humanity, become a student member of the UI Alumni Association, learn a new sport through intramurals, or join the staff of the Daily Iowan.

If the hectic whirl of orientation seems hard on the incoming students, spare a thought for parents. After all, they also have to deal with new living arrangements, an unfamiliar schedule, and probably some financial challenges. 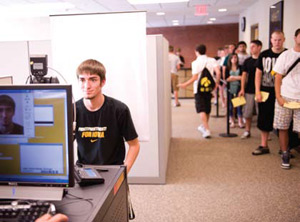 At the first orientation session, a woman watches her 18-year-old son walk away with his advisor. Recalling him as a chubby-cheeked, totally dependent infant, she grabs a tissue as tears stream down her face.

While this touching scene plays out in "The Amazing Race: UI Edition" video, it's also a familiar moment for many parents sending their first child off to college. "It's natural to want to take over when your student is struggling, but to do things on their own is a critical part of their development," says Jon Sexton, 06MA, interim director of orientation services. "They can get to class, take care of themselves, get enough sleep, and make wise personal health decisions."

While students mull over course listings, parents pack the IMU ballroom to learn how to support their children during this transitional time. When Sexton asks parents who are sending their last child off to college to raise their hands, they cheer instead. A round of applause breaks out for the couple dispatching child No. 8. 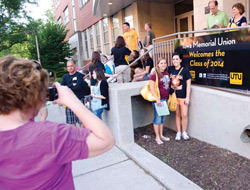 Natalie Melloy's mother, Lisa, is one of these expert parents, waving goodbye to the last of three children. Like many freshmen, Natalie believes her mother will have a difficult time adjusting to a quiet house. But Lisa says, "To be honest, I feel freer now."

Freer, maybe—but still bound by the ties of love and mutual need. That's why orientation advisors encourage parents to write personal letters that will be delivered to their students during the first week of school. "I told Natalie how proud I was of her," says Lisa. "I'm pushing for her to live life as she dreams."

That's what happens when you become a Hawkeye.