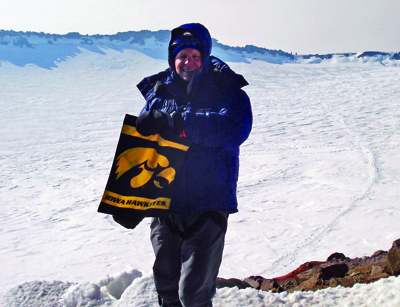 Tom Schultz, 01BBA, of North Liberty, proudly holds an Iowa flag at the top of Mount Rainier in Washington state. Over a period of four days, Schultz, an avid outdoorsman, climbed the 14,411-foot-high peak, the most highly glaciated in the contiguous U.S.

"It was harder and more dangerous and intimidating than I expected," says Schultz, who trained for the expedition for five months. "It became a mental challenge—to push myself to take step after step after step. It took my body quite a while to recover from the ordeal."

Schultz made the climb in memory of his mother, who died from breast cancer, and for his father, another adventure-lover who became quadriplegic following a car accident 13 years ago. Schultz also took a special commemorative photograph at the summit to post in his young son’s room. He explains, "I wanted to show him that there are no limits to what you can achieve."