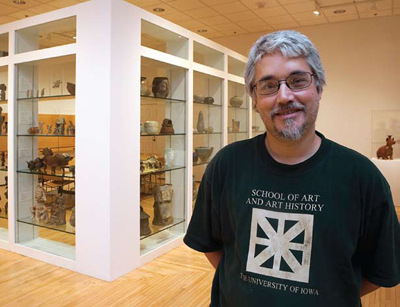 Men in tuxes and women in flowing dresses swirl around the room to the beat of a big band. Tables boast the finest linens with every steak knife, salad fork, and dessert spoon in place. Pillars and an arched ceiling add grandeur to a space familiar to generations of University of Iowa students.

As the UI Museum of Art's preparator, I had another use in mind for the stately dance hall: I was going to change it into an art gallery. President Mason temporarily gave the UIMA the ballroom so art students wouldn't have to drive to the Figge Art Museum in Davenport to view drawings, paintings, and ceramics for their studies. First, though, I had to figure out how to carry out this extreme makeover.

After all of my organizing, packing, and unpacking after the 2008 summer flood, I was happy to install exhibits again. Yet, this was bigger than anything I'd ever taken on. When an architectural firm, my university and UIMA colleagues, and I started the $1 million renovations this past March, we knew we had just six months to transform a magnificent ballroom into a practical place to store, display, and study some 500 works of art.

Artwork that would normally be displayed in 40,000 square feet had to be squeezed into a space onetenth that size. The Richey's windows, pillars, and arched ceiling may have brought elegance to the ballroom, but none of these features are practical for an art gallery. Light must be carefully managed in a museum, and a high ceiling makes it difficult to provide the controlled climate necessary for fragile works of art.

Finally, we decided to build a room within a room, effectively creating a blank slate. We lowered the ceiling from 18 to 12 feet and closed off the windows, but at least one feature from the ballroom was restored to its glory days—the original maple dance floor now gleams.

Our goal was to give students access to as many objects as possible. With limited space, we focused on the UI collection's strengths. The new gallery includes African, Chinese, Japanese, Tibetan, and ancient American art, as well as 20th century European and American ceramics, conceptual art, and a changing selection of figurative art. We also added more than 250 prints, drawings, and photos previously in storage at the UI Libraries' Special Collections.

Our insurance company only allows art with a total value substantially less than that of the whole collection to be displayed and stored in the gallery, which doesn't allow us to include our most important and valuable paintings, such as Jackson Pollock's Mural. Still, we're proud of what we achieved.

Known as the UIMA@IMU, the gallery gives patrons—members of the public, as well as UI students—an intimate, informal experience with the kind of art that transforms lives, not just spaces. The Richey may no longer be a ballroom, but it gives art lovers good reason to dance for joy.