By Shelbi Thomas
3 minute read
The new Across the Aisle program teaches participants how to have productive conversations about gun control, abortion, and other hot-button topics. 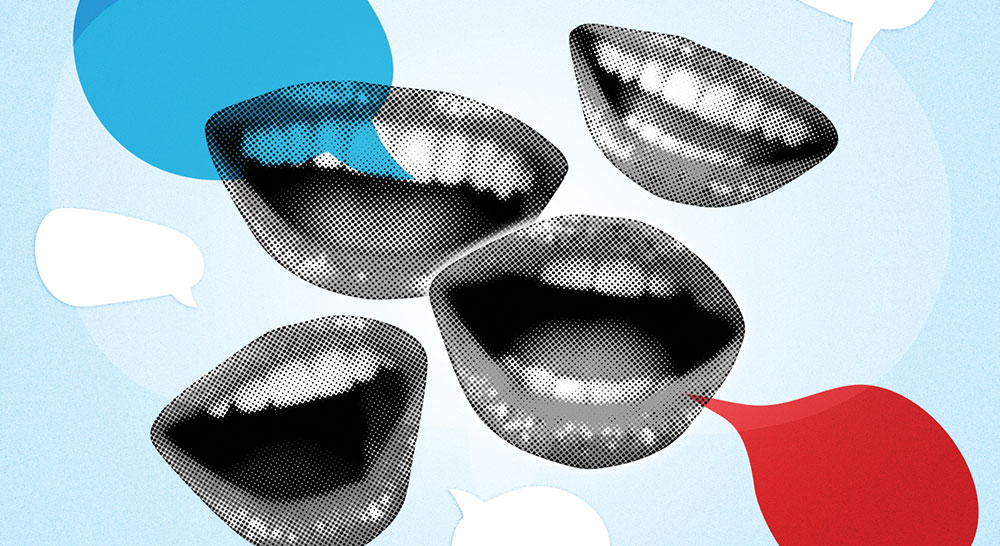 Holden Sinnard is a firm believer in strict gun control. But through Across the Aisle—a new University of Iowa College of Law program designed to help participants communicate through differences—the second-year law student managed to find at least one thing he and a pro-gun rights peer could agree on.

Both students’ viewpoints were motivated by concerns for safety.

“Sometimes the discussions when you’re on the opposite ends of things are just about trying to convince the other person, ‘I’m right; you’re wrong,’” says Sinnard, who’s originally from Waukee, Iowa. “I like the environment here better, because the first thing we asked each other was, ‘Why do you feel this way?’”

Across the Aisle launched last year as a way to broaden the reach of the college’s diversity, equity, and inclusion initiatives. Since then, law students who participate in the voluntary program have discussed hot-button issues such as immigration, capital punishment, and abortion. Law faculty and staff are also invited to join the lunchtime conversations. “In the current political and social climate, it’s easy to demonize your opponent,” says UI College of Law professor and event organizer Mihailis Diamantis. “The goal is not to change anyone’s mind. It’s an opportunity to learn about how someone else views socially and politically divisive issues.”

Third-year law students Hibah Lateef and Serena Qamhieh (20BA) enjoy discussing controversial topics as housemates and are now extending what they’ve learned to their peers as the lead student organizers of Across the Aisle. Together with fellow organizing committee members Sophia Ortiz (20BA) and Hanaa Maselmeh, they create handouts for each event with potential discussion questions, relevant case law, and anonymous student viewpoints to keep the conversation rolling.

Lateef says the events have exposed her to a wide range of opinions that have helped her form and solidify beliefs. “It’s really helpful to hear different perspectives that I hadn’t even thought of before, and I think it also makes people understand these topics to be more nuanced than they generally appear to be,” says the Dallas native. “Gray areas don’t make the headlines, but the discussions were all gray for us.”

The value of learning civil discourse became especially apparent to Qamhieh this past summer during a job shadow. “I’d see a lot of times where prosecutors are talking to public defenders. They have some clear disagreements, but they stay civil and calm the entire time, and that’s how they keep the process moving,” says the Ames, Iowa, native. “Across the Aisle is just another setting where we’re asking students to practice what they’re going to take with them when they enter the profession.”

Diamantis adds that while public dialogue is often driven by loud voices at the extremes, the program creates a space for students to be vulnerable about their positions, even if they’re unsure or find themselves somewhere in the middle. “Law students have above-average rates of taking on public-facing roles as judges and politicians,” he says. “To be able to model a civil dialogue, which is without a doubt missing for the most part in public discourse, is the only way we can move forward as a society.”