By Josh O'Leary
3 minute read
A recent program traces the history of the pride movement at the University of Iowa. 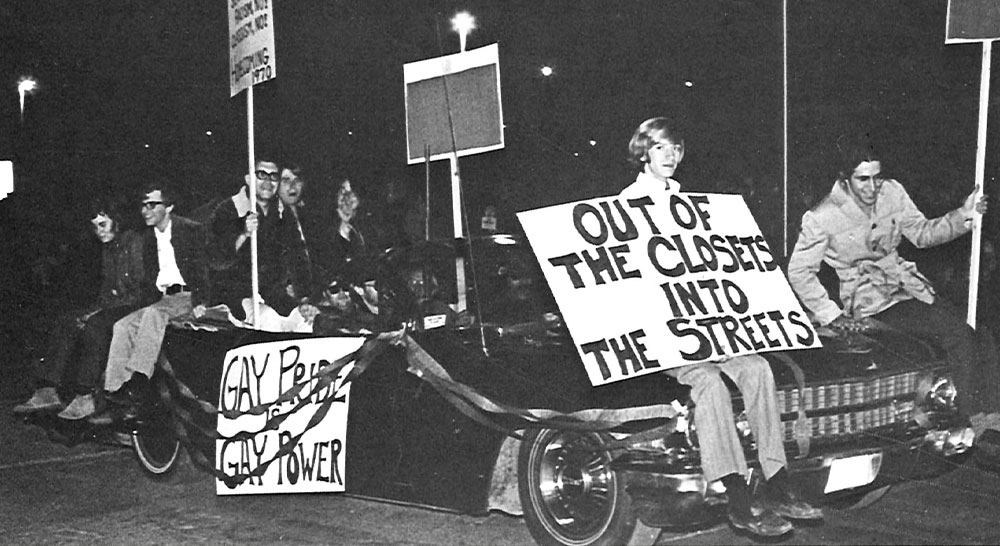 In fall 1970, a unique homecoming parade entry turned heads when it rolled through downtown Iowa City. Students with the Gay Liberation Front rode atop a convertible decorated with streamers and signs reading “Gay Pride is Gay Power” and “Anti-Homecoming Queen 1970.”

“I thought at the time, ‘My gosh, what am I doing? I might get beat up,’” Raymond Perry (71BA, 74JD), a founding member of the student group and parade participant, recalled in a 2013 interview that’s part of the University Archives Oral History Collection. “The fear was palpable. To be in a parade and identify yourself as being gay, I still think at that time and place was quite courageous.”

UI student government voted that semester to appropriate $200 for programming for the Gay Liberation Front. With the support of the administration under President Willard “Sandy” Boyd, the UI became the nation’s first public university to officially recognize a gay and lesbian student organization. 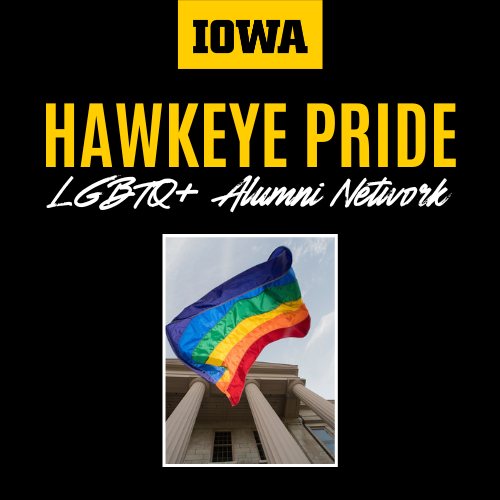 Earlier this year, members of the newly formed Hawkeye Pride Alumni Network reflected on those early days of activism in Iowa City with a virtual history talk led by former UI Archivist David McCartney and Aiden Bettine (20MA), the former community and student life archivist at UI Libraries Special Collections and executive director of the LGBTQ Iowa Archives and Library.

“It was a time of great anxiety and great exhilaration,” McCartney said of the year the Gay Liberation Front debuted at the homecoming parade. The group also hosted a social at the Iowa Memorial Union that fall, and The Daily Iowan ran a five-part series on gay liberation. Soon, feminist, lesbian, and gay publications emerged from the newly founded Iowa City Women’s Press, and the first Midwest Gay Pride Conference was held at the IMU in 1974. The decade also saw the Gay Liberation Front shift from radicalism to a service-oriented focus as it became the Gay People’s Union, the formation of the Iowa City-based Lesbian Alliance, and the start of women’s Take Back the Night marches.

Another pivotal moment in Iowa City’s LGBTQ+ history came in 1993, when the UI became the first public university in the country to offer insurance benefits to employees’ domestic partners. Then in 2006, what is now known as the Pride Alliance Center opened its doors as a nurturing and affirming space for LGBTQ+ students.

But McCartney said that Iowa’s progress wasn’t without its struggles: Two of the university’s most legendary figures, playwright Tom “Tennessee” Williams (38BA) and painter Grant Wood, faced considerable discrimination within their departments in the 1930s because of their sexuality. In the 1960s, UI medical researchers worked to develop supposed treatments for young men with “homosexual preoccupations,” according to notices in The Daily Iowan. And during the AIDS crisis of the 1980s, advocacy groups struggled to get support from the university for safe-sex initiatives, McCartney said.

Today, the legacy of those early activists can be found across campus. There are student groups like the Queer Liberation Front, an array of professional-based identity organizations like Equal Meds, events like a recent Trans Visibility Day rally, and resources like UI Health Care’s LGBTQ Clinic.

For the UI’s archivists, history is still unfolding. “We’re working hard to find new ways to work with student organizations and acknowledge the queer history in the making on campus,” said Bettine.