Deb Carneol (92DDS) stood amid a vast frozen wasteland of ice and snow. Bundled up this past January on a Russian air base in Antarctica, the co-owner of a dental practice in North Liberty, Iowa, was ready to do something few in the world have attempted or achieved: seven marathons on seven continents in seven days. With ice-capped rock formations dotting the landscape, Carneol—along with around 50 participants from more than a dozen countries—began the fourth annual World Marathon Challenge. 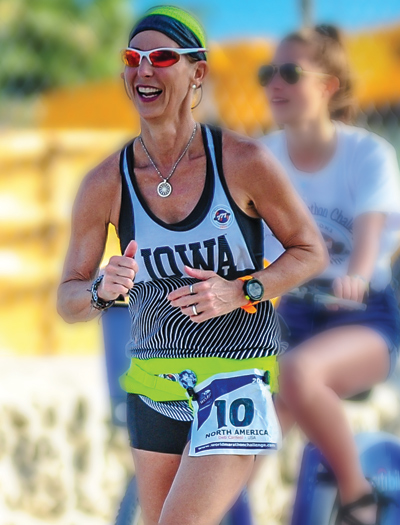 PHOTOS: MARK CONLON/WORLDMARATHONCHALLENGE.COM Top Image: Carneol (second from left) in Antarctica. Above: Deb Carneol is all smiles as she completes the final leg of the World Marathon Challenge in Miami.

For Carneol, a self-described non-runner, the idea of racing 183.4 miles in 168 hours started with a phone call in May 2016 from David Samson, a longtime family friend and former president of the Miami Marlins. Samson was calling friends who were athletic and ambitious to join him in the race. "I told him that I don't run," says Carneol. "But I've always enjoyed a challenge, so in the back of my mind I knew that I wanted do it."

In the year-and-a-half leading up to the first race in Antarctica, Carneol slowly advanced from non-runner to completing four marathons and running as much as 70 miles per week. Carneol's personal trainer, former UI rowing coach Mandi Kowal, provided her with a game plan: long-distance running mixed with shorter training days.

Unlike training for one marathon, this plan had few days of rest. "I needed to build up stamina, strengthen my muscles, and learn how to run on tired legs," says Carneol, an avid Hawkeye fan and UI College of Dentistry graduate. "The last thing I wanted to do was destroy my body before I actually might destroy my body."

When the day of the first World Marathon Challenge race in Antarctica arrived, Carneol jumped on a chartered plane ready for a once-in-a-lifetime experience. The journey, though, wasn't without its ups and downs—blisters sustained while running on the packed ice surface in Antarctica; a sub 5-hour marathon along the ocean in South Africa; extreme muscle tightness that hindered her stride in Australia, the United Arab Emirates, and Portugal; 90-degree heat in Colombia; and finally, nearly 30,000 flight miles later, an emotion-filled day being cheered to the finish line by family and friends in Miami.

While the experience punished her body, Carneol used the opportunity to raise $48,600 for Iowa-based Clubfoot Solutions, which uses the Ponseti Method to help treat children born with clubfoot. The Ponseti Method, the international standard for clubfoot treatment, was developed by orthopedist Ignacio Ponseti (44R, 07DSC) at the UI.

"I liked the idea of running around the world so that children with clubfoot can walk," says Carneol, who became the first Iowan to complete the competition, along with Survivor contestant Sarah Lacina of Marion. "Being part of something bigger was a reason I chose to do the World Marathon Challenge."