A new documentary follows a collector’s efforts to preserve a chapter of Iowa film history. 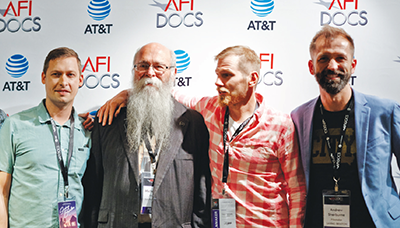 In the lobby of the Silver Theater near Washington, D.C., a crowd gathers around an impressively bearded Iowan who hand-cranks an antique projector. The film flickers onto the screen, where a vaudeville magician waves a sheet in front of two disappearing—then reappearing—assistants.

This silent film, a 1906 piece titled Magic Roses, is among the collection of rare movies that projector operator Mike Zahs rescued from the basement of an Iowa farmhouse. Now—as chronicled in Saving Brinton, a new Iowa-made feature documentary—these long-forgotten reels have gained new life.

Iowa City filmmakers Tommy Haines, 05BA; John Richard, 04BS; and Andrew Sherburne premiered Saving Brinton at the American Film Institute’s prestigious AFI Docs festival this past summer in Washington. Beforehand, Zahs wheeled his projector into the lobby and charmed the pre-show audience with one of the century-old films at the heart of the documentary.

Saving Brinton tells the story of how Zahs, a retired schoolteacher and collector from Washington, Iowa, came to own and preserve the trove of films from cinema’s early days. In 1981, Zahs purchased the estate of W. Frank Brinton, whose belongings long sat gathering dust in a rural Washington County basement. Nestled among the items were nearly 130 cellulose nitrate films—more than five hours of images from the world’s first moviemakers.

Brinton, who managed Washington’s Graham Opera House, was an Iowa entertainment pioneer at the turn of the 20th century. The showman barnstormed from Minnesota to Texas, delighting audiences with his lectures, slideshows, and newly invented motion pictures. Brinton’s film collection included works by Georges Méličs, a French illusionist considered the father of special effects, as well as newsreels showing Teddy Roosevelt, animals at the London Zoo, and exotic locales like Burma.

The documentary partners spent nearly four years following Zahs, who, like Brinton, has worked tirelessly to introduce the historic films to new audiences. “As soon as I met Mike, we were hooked by his charisma and the vastness of his collection,” says Haines. “I was shocked to see all of these films from the dawn of cinema here in Iowa.”

In 2014, Zahs donated an estimated 8,000 Brinton items to the University of Iowa Libraries’ Special Collections. In addition to the films, the collection includes show receipts, posters, and other artifacts from an era when movies were truly a magical experience for audiences.

“It’s fascinating to imagine what it was like for people to come off the farm in the 1800s, when photography was new, and see moving pictures, special effects, and far-off places for the first time,” Richard says.

Like Iowa showman Frank Brinton more than a century ago, Mike Zahs and the Saving Brinton filmmakers will embark on a barnstorming tour of their own this fall. They plan to screen the documentary and showcase Brinton’s old movie reels at theaters across the state—including a Sept. 29-Oct. 5 stop in Iowa City. The filmmakers have also entered Saving Brinton into a number of national movie festivals and are exploring distribution possibilities. For more information and to view the trailer, visit brintonfilm.com.