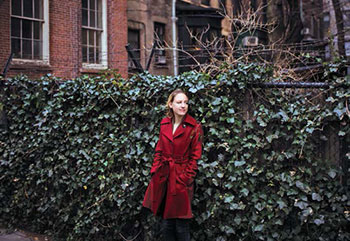 ae Winkelstein, 12MFA, waxed lyrical about the amazing properties of both moss and mugwort—a tall, fringed plant that smells of camphor—in courses she taught at an unusual "crowd-sourced" education organization. The Brooklyn Brainery, described on its website as similar to a "book club on steroids," recruits enthusiasts like Winkelstein to teach affordable classes that range from the expected (home brewing, financial planning, and literature) to the downright quirky (fermented drinks, how to be a spy, and the history of garbage).

Winkelstein's interest in such easily overlooked plants dates back to when she lived in Vermont and took undergraduate botany courses. "In Burlington, we had to create an herbarium collection including 15 or so plant families," she says. "I didn't have a car, so I didn't think I'd find many just walking around in a densely built town—but I did."

When Winkelstein moved to New York City in 2012, after graduating from the Iowa Writers' Workshop with an M.F.A. in poetry, she used her botany experiences to help New Yorkers discover the nature that thrives in an urban setting.

For her first class, "Sporophytes and Gametophytes: The Double Life of Moss," Winkelstein and class members examined the growth patterns of moss samples and marveled at the plant's ability to thrive even in the midst of winter. In the mugwort session, Winkelstein showed students the plant's densely silverhaired leaves under a microscope lens and helped them create "dream pillows" by enclosing the herbs in pieces of cloth. Also known as sailor's tobacco and wormwood, the plant has found various uses over the centuries; it's listed in a 10th-century Anglo-Saxon herbal charm, while today it's a common ingredient in Korean rice cakes, soup, and traditional healing.

As Winkelstein notes: "I'm always amazed at the diversity of plant life growing in the city."