View All From You
Share
IOWA Alumni Magazine | February 2011
Mad About Montana
By Tina Owen
After relocating out West for work, former Cedar Rapids native Lauren Chase jokes that 'Montana has two seasons: winter and road construction.' Still, she admits that her heart stops whenever she crests a ridge and sees a majestic mountain range stretching across the horizon. 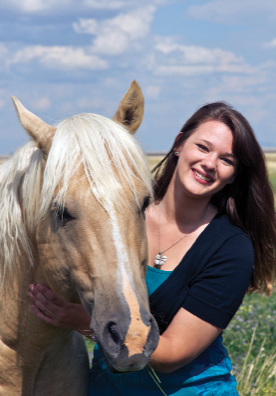 What began as a summer internship for Lauren Chase has turned into a full-time appreciation for some of America’s unsung heroes.

As a multimedia outreach specialist for the Montana Stockgrowers Association, Chase*, 10BA, uses words, photographs, audio, and video to help promote the message that America relies on its farmers and ranchers.

“For many people, there’s an amazing disconnect; they have no idea where their food comes from,” she says. “I want to show the hard-working people that put the food on our plates.”

With remote ranches often a nine-hour drive away, Chase travels thousands of miles to obtain material that she posts on the association’s website (www.mtbeef.org), blog, Twitter account, and Facebook page. In addition to chronicling daily life, she delves into topics such as women in ranching, traditional cowboys, and environmental stewardship of the land. Two of her videos have recently won awards from a marketing association and a film festival.

Before she worked for the association as an intern last year, Chase had never experienced Big Sky Country. Even for this Iowa native, life on the range proved quite a culture shock. At first, Chase didn’t know the difference between a bull and a steer, or why cowboys wear spurs. Now, she’s comfortable enough to ride horses, feed calves, and attend branding day. “

According to stereotypes, people in agriculture are dumb hicks,” she says. “In fact, they’re some of the most intelligent people I’ve ever met. They need to know about business, law, chemistry, botany, genetics, and political science, and they’re always problem-solving.”

As she discovered first-hand, ranchers also offer a warm welcome. “These are the people who feed me and give me a bed for the night when I visit them,” she says. “They even put gas in my truck!”

Eventually, her words and images will appear in coffee-table books celebrating Montana’s people and landscapes. In the meantime, they help attract visitors to the association’s Facebook page, which now boasts almost 2,000 fans.

While it may seem odd to use modern technology to tell the story of such a traditional lifestyle, Chase is grateful for the Internet and online social networks. As this journalism and anthropology graduate notes, “Without Facebook, I wouldn’t have a job!”

Let alone one where she obviously feels so at home, on the range.